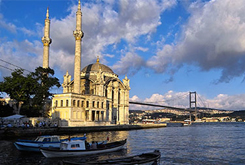 From June 1st to 3rd Istanbul will host the Smart City Expo edition for South-eastern Europe and the Middle East. With the Turkish capital city not only as a backdrop but also as a prime example of the specific challenges that cities in this part of the world are facing, Smart City Expo Istanbul will have “Cities in Motion” as its main claim hence focusing on mobility and urban transformation as two of the main drivers of urban development. Held at the Haliç Congress Center, the event is jointly organized by the Istanbul Metropolitan Municipality (through Kültür AŞ) and Fira de Barcelona.

Smart City Expo Istanbul comprises a congress and an exhibition where companies and institutions will showcase their projects, technologies and urban solutions to visitors and experts alike. The conference will focus on 6 key themes –Mobility, Innovation and Technology, Energy, Smart Society, Entrepreneurship & Economic Development, and Big Data & Urban Management–and will feature over 20 speakers and 20 different session among which the two keynotes by Mobility experts Anthony Townsend, senior research Scientist and NYU’s Rudin Center and Principal at Bits and Atoms, and Phillip Rode, Director of the LSE Cities at the London School of Economics.

This special focus on Mobility will also hold Istanbul projects in the spotlight. The Turkish metropolis is facing important challenges in this field and is undertaking several projects to tackle this issue including new metro lines, new bridges and an underground tunnel connecting the Asian and European continents, a new Airport and different smart traffic management solutions which will be showcased at the event.

The opening ceremony that will take place on June 1st and will be presided over by the mayor of Istambul, Kadir Topbaş, along with the former Prime Minister of Spain, josé Luis Rodríguez Zapatero, and the Deputy Executive Director of UN Habitat, Aisa Kirabo Kacyra.