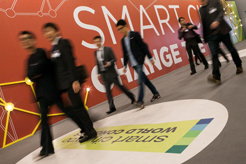 The Canadian city of Montreal will host the first North American edition of Smart City Expo World Congress on December 2014. Fira de Barcelona, the Palais des Congrès du Montreal and Eventium will jointly organize the symposium that will gather leading urban experts and thinkers, city government representatives and companies working on the smart urban solutions industry in the Québécois capital from December 10th to 12th.

“Fira de Barcelona is very pleased to hold Smart City Expo in Montreal and we are very happy to join the Palais des Congrès de Montreal and Eventium in such an enticing project“, said Ricard Zapatero, International Director of Fira de Barcelona. “The smart urban solutions industry is one of the key economic drivers in the near future and also a tool to help us develop sustainable and more livable cities and with it a better future for both the developed and developing world, so we look forward to making this a very successful event.”

Participation in the World Urban Forum
Fira de Barcelona and SCEWC are taking part in the conference programme of the seventh World Urban Forum (WUF7) that the United Nations is holding in Medellin (Colombia). The direction of the WUF7 commissioned the Catalan institution and its smart cities summit with the organization of two panel discussions on urban resilience that will be held this evening under the headings: Current Urban Solutions in the face of Climate Change, and How to Prevent and Manage City Emergencies. SCEWC has been the only event invited to participate in the conference programme this year.

International Business Strategy
Both initiatives are part of the internationalization strategy of Fira de Barcelona. The exhibition organizer is launching new shows in strategic markets. Among them feature the Brazilian and Mexican editions of Alimentaria, the International Food and Beverages; Piscina Moscow (Russia), focused on the Pool and SPA industry; and Construmat Recife (Brazil). Fira has also set foot in the Persian Gulf partnering with qMedia and the Qatar Tourism Authority to jointly organize the Qatar Motor Show and the Doha Jewellery and Watches Exhibition.