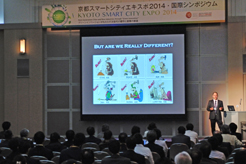 Smart City Expo gathers over 1.700 delegates in Kyoto on its first Japanese edition

Over 1.700 delegates from 22 countries attended the first Japanese edition of Smart City Expo, which closed this afternoon (Japanese time) after two days of conferences and round tables where city government representatives, leading urban experts and thinkers, as well as companies working on smart urban solutions explored together the future of cities. The symposium, born from the successful Smart City Expo World Congress held in Barcelona was jointly organized by the Kyoto City Government, Kyoto Prefecture and Fira de Barcelona and promoted the exchange of smart city-related technology through a three pole network between Asia, Europe, and South America.

“This first Japanese edition of Smart City Expo has been a tremendous success and we thank partners at the Kyoto Prefecture and Kyoto City Government as well as the attendees, cities and companies present for their support,” said Lluís Gómez, International director of Smart City Expo World Congress. “Beyond the number of attendees, participating companies and cities, we are very excited after ascertaining that the development of smart cities is a key driver within urban planning worldwide and every actor involved in this process is fully committed and willing to learn, work and share their knowledge and technology in order to achieve this common goal globally.”

Society and Technology, main drivers at Kyoto
The conference programme of Kyoto Smart City Expo comprised two main themes: Smart Cities for Urban and Social Development, which explores the urban and social changes that cities are experimenting due to new policies and technologies; and Technological Research and Industry for Smart Cities, which looks into environmental and mobility challenges in cities, focusing on new solutions and developments.

This first edition of the symposium included speakers such as Carlo Ratti, Director of the SENSEable City Lab at the MIT; Daisaku Kadokawa, Mayor of Kyoto; Prem Anand, Deputy Secretary for the Ministry of Urban Development of India; Eddie Bet-Hazavdi, Director of Energy Conservation and Smart City Development, Ministry of Infrastructures, Energy and Water of Israel; Osamu Masuko, President of the Mitsubishi Motors Corporation; Jong-Sung Hwang, Head of National IT Policy Group of South Korea; and Seiichi Nishimoto, Chairman of the Advanced Scientific Technology & Management Research Institute of Kyoto, among others.

The conferences and keynotes took place both in Kyoto and the Kansai Science City of Keihanna ¿ nestled in the hills between Kyoto, Osaka and Nara ¿, an innovative Japanese national project dedicated to fostering cultural and scientific research.