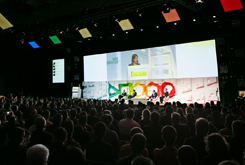 The 2017 edition will have a special focus on citizen empowerment, technology and mobility

Under the theme Empower Cities, Empower People, SCEWC will bring together some of the world’s top thinkers with the aim to create an unmatchable platform for knowledge sharing and the promotion of new initiatives. SCEWC will have a special focus on 3 key themes for cities worldwide: citizen empowerment, technology and mobility.

The crossroads between cities, security and technology is Robert Muggah’s field of expertise. A political scientist and urban specialist, Muggah is the co-founder of the Igarapé Institute and The SecDev Foundation and is largely known for his work on fragile cities, arms control, and migration. His work on designing platforms to map arms transfers, track homicide, predict crime, and promote accountability among police is globally recognized. He advises the OECD, UN and World Bank and he was listed as one of the top 100 most important people in violence prevention in 2013.

Joan Clos is the Executive Director of the United Nations Human Settlements Programme (UN-Habitat) since October 2010. Prior to joining the United Nations, he served as the Spanish Ambassador to Turkey and Azerbaijan and was Minister of Industry, Tourism, and Trade of Spain and has an extensive background in urban governments having been elected twice as mayor of Barcelona from 1997 until 2006 after serving as city councilor since 1983.

Bettina Warburg is a blockchain researcher, entrepreneur and educator. Trained in political science, she leads the blockchain practice at Animal Ventures working with Governments and members of the Fortune 500 to help drive the global commercialization and integration of blockchain technology. A graduate of both Georgetown and Oxford, where she studied Political science, Warburg started her career as Public Foresight Strategist at the Institute for the Future.

Smart Mobility World Congress
One of the key subjects every city has to address is Mobility. The ability to guarantee safe and easy movement both within a city and from one metropolis to another has indeed become one of the cornerstones of smart cities. On 2017, SCEWC will host the first Smart Mobility World Congress, a smart transport summit that will be held yearly and will showcase the most innovative advances in urban and inter-city mobility.

Among the speakers who will debate about the future of transportation means will be Dirk Ahlborn, CEO of Hyperloop Transportation Technologies, the new transportation mode envisioned by Elon Musk consisting of a sealed tube or system of tubes through which a pod may travel free of air resistance or friction conveying people or objects at speeds of up to 1,200 km/h; and Shashi Verma, ‎Chief Technology Officer & Director of Customer Experience at Transport for London.

An international benchmark
With more than 700 cities, 400 speakers and the leading companies in the smart urban solutions industry, SCEWC is the world benchmark event. Among the 600 companies exhibiting at the 2017 edition are Deutsche Telekom, Engie, Huawei, Mastercard, Microsoft, Siemens, Suez and ZTE. Cities and countries will also showcase their projects and initiatives and within the list of confirmed exhibitors are Denmark, Dubai, Sweden, Germany, Finland, Holland, Israel, London, New York, Norway, Quebec, Spain and the United States.

On its last edition, it gathered over 16.000 professional visitors from 126 countries, as well as 420 renowned speakers and 591 exhibitors, as well as representatives of more than 600 cities. The international impact of the show has grown with regional events in Casablanca (Morocco), Istanbul (Turkey), Kyoto (Japan) and Puebla (Mexico) and very soon Buenos Aires (Argentina) further consolidating Smart City Expo as the international leading event in smart urbans solutions and drawing more attendees and interest toward the global event held in Barcelona every year.