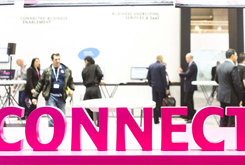 Amazon, CERN, GE, Intel and IBM to keynote at the Internet of Things Solutions World Congress

The three-day conference program of the first edition of the Internet of Things Solutions World Congress (IOTSWC) will feature top experts and key companies and institutions working on the industrial internet among which are Accenture, Amazon, Bosch, CERN, Deloitte, GE, HP, Indra, Intel and IBM. The comprehensive conference program is structured in six areas: Manufacturing, Transport & Logistics, Healthcare, Energy and Utilities, Technology, and Innovation.

The newly launched event has established a partnership with the Industrial Internet Consortium (IIC), the sector’s leading association, who has advised Fira de Barcelona in the design of the conference program. Among the topics discussed are Driving to a Zero Defect Strategy: IoT use in car production; Eliminating unplanned downtime in the Connected Factory; Improving Complex Patient Care through Big Data Analytics; The Connected Flight; The Internet of Energy; Interoperability in IoT: The role of standards; and IoT Weather forecasts to increase cross industry productivity.

IOTSWC will feature keynotes from 100 top experts who will discuss the opportunities offered by IoT technology to such industries as manufacturing, transportation, logistics, energy & utilities and healthcare, as well as its transformative role in the economy. Among the confirmed speakers are Prith Banerjee, Managing Director of Global Technology Research and Development at Accenture; Michael Raynor, Director at Deloitte Services LP; Jonathan Ballon, VP and General Manager of IoT at Intel; and Richard M. Soley, Chairman and CEO of OMG and Executive Director of the Industrial Internet Consortium.

A benchmark event
Over 80 companies have already confirmed their participation making IOTSWC’s first edition an international benchmark event of the industrial internet already. According to several reports IoT will become a major driver of a global economic and industrial transformation. A study by Accenture indicates that the Industrial IoT will produce 14 trillion USD of economic value by 2030.

IOTSWC will also include an exhibition area that will feature not only companies and their latest innovations but also three testbeds with real-life applications of these solutions. These demonstrations will showcase enhanced aircraft assembly, power microgrid connectivity and emergency communications.