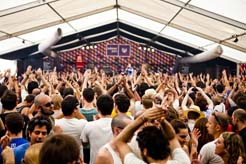 The Montjuïc exhibition centre is the new venue for daytime concerts

Sónar, 20 years of electronic music in its purest form

Fira de Barcelona is setting the stage for Sónar, one of the world’s biggest electronic music and multimedia art festival that is celebrating its 20th anniversary this year. For this edition, which is being held from June 13th to 15th, the Montjuïc Exhibition Centre will be the daytime venue for the first time, while the Gran Via Exhibition Centre will continue to host the night time programme.

The festival is celebrating its 20th anniversary with concerts by great stars, such as Kraftwerk, Pet Shop Boys, Derrick May, Matthew Herbert and Laurent Garnier. Another highlight will be the dance music sessions with artists such as Lindstrom&Terje, Skrillex, Diplo, Paul Kalkbrenner, Justice DJs, Modeselektor DJs and Major Lazer, among many others.

This year sees the creation of Sónar +D, a space that is bringing together over 2,500 professionals from creative and technological industries representing 1,400 companies from 50 countries. The aim is to promote creativity, technology, innovation, music and business with workshops, interactive installations, demos and product presentations. This initiative has the collaboration of the Mobile World Capital.

In addition to concerts, Sónar is featuring film screenings and exhibitions of multimedia art works and experimental technologies.

In 20 years of the festival, Sónar Barcelona has received over 1.2 million visitors from around the world and more than 7,000 artists.