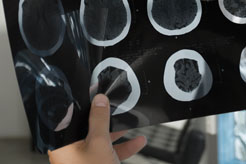 Sleep disorders and Parkinson's Disease are among the topics to be covered by the 3,000 attendees

This year, Fira de Barcelona is hosting a number of large medical congresses, one of which is starting tomorrow, Saturday, June 8th and will end on Tuesday, June 11th.  It is the 23rd Congress of the European Neurological Society (ENS) bringing together over 3,000 professionals working in this medical speciality. The ENS congress, which is being held in the Gran Via Exhibition Centre, also includes an exhibition area.

Leading experts in neurology will present the most important trends and advances in neurology research and therapy, with special attention on sleep disorders and diseases, Parkinson’s, the prevention and treatment of apoplexy, dementia and multiple sclerosis, among other pathologies.

Other topics include advances in migraine treatments for children and adults, new methods of carrying out tests on comatose patients and the latest research in epilepsy therapies. The congress will dedicate a specific session to attention deficit disorders in adolescents.

In addition to the scientific aspect, the ENS congress is providing the setting for an exhibition area, in which pharmaceutical companies, publishing companies that specialise in medicine and manufacturers of technical equipment and software will be participating.

Strategic plan
The ENS is one of the seven medical congresses that Fira de Barcelona is hosting in 2013, four of which are European. The other three are the Congress of the European Respiratory Society (ERS), the meeting of the European Association for the Study of Diabetes (EASD) and the International Conference on Innovative Approaches in Head and Neck Oncology (ICHNO). This year, the Barcelona institution has also hosted other national medical events, such as the meeting of the Spanish Society of Primary Care Doctors (Semergen), the Medicine Up-Date Sessions, organised by the Academic Foundation of Medical and Healthcare Sciences of Catalonia and the Balearics, and the Spanish Neonatology Congress. In total, these events will have attracted over 49,000 professionals to the city.

Holding these medical congresses is part of Fira’s strategy to attract important European and world events to Barcelona. Since 2006, the trade fair institution has hosted 37 medical events, many of them global leaders, such as the World Cardiology Congress, the European Cardiology Congress, which will be held again in 2014, and the European Molecular Biology, Respiratory, Haematology, Urology and Toxicology Congresses, among others.

The complete ENS programme is available at http://www.congrex.ch/ens2013

On Monday, June 10th, at 11 a.m., in the Gran Via Exhibition Centre press room, there will be a press conference (in English), in which all the details of the congress as well as the new techniques presented will be explained.