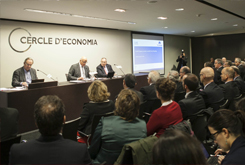 Fira de Barcelona’s activities have an annual economic impact of over 2,600 million euros

Fira de Barcelona’s activities have an annual economic impact of 2,624 million euros with a Gross Value Added (GVA) equivalent to 1.21% of Catalonia’s GDP and the creation of over 40,000 jobs. These are some of the main figures from the recent survey conducted by ESADE which also highlights the institution’s social and public contribution to the benefit of the local population and the environment.
The survey conducted by the business school focused on the activities of Fira de Barcelona between 2012 and 2014, during which time around 200 events were held involving more than 27,000 direct exhibitors and over two million visitors per year. It confirms that the institution is a key player in the creation of wealth and the economic and social revitalization of its catchment area as an important asset that generates a range of benefits not only for event organizers and participants but also for its stakeholders and the region itself.
The report was presented today at the Círculo de Economía (Economy Circle) by the vice-president of this organization, Josep Oliu; the president of the Board of Directors of Fira de Barcelona, Josep Lluís Bonet; and the director of the Institute of Public Governance and Management of ESADE, Albert Serra.
The president of Fira, Josep Lluís Bonet, underlined the importance of “updating and highlighting the economic and social impact of the institution at a time when we are emerging from the serious economic crisis and, above all, recognising its position in the international trade show sphere, with a hugely diversified portfolio of products and services and an increasingly international dimension.”
Job creation
The trade shows, congresses and events organized or hosted by Fira de Barcelona have an extremely positive impact on the city, its catchment area and the country as a whole by propitiating economic activities in various spheres and helping to generate business for the participants in its events and for local industry, as well as creating thousands of jobs.
To determine this impact, the Input-Output Framework for Catalonia 2011 was used, taking four basic variables into consideration: visitor and exhibitor spending, operating expenses, investments in infrastructures and installations, and the creation of economic activity and business of its participants. The final outcome is the result of calculating the direct, indirect and induced effects.
According to the report, the total annual economic impact of Fira is 2,624 million euros, which generates a Gross Value Added (GVA) of 2,360 million euros, equivalent to 1.21% of Catalonia’s average GDP.
In addition, trade show activities facilitate the creation of 40,580 jobs, 43% of which are in sectors such as restaurants, accommodation, retail, transport and leisure.
Furthermore, the activities conducted in the exhibition venues also have a tax implication that results in revenue for the Tax Office of 782 million euros per year from VAT, income tax and company tax.
Visitors and exhibitors
A considerable proportion of this economic impact (over 1,000 million euros) comes from spending by exhibitors and visitors attending the different events held at the Montjuïc and Gran Via exhibition centres. The attraction of professional participants brings international business tourism to the city and its surrounding area which helps to make tourism less dependent on seasonality and gives it a more qualitative profile.
One of Fira de Barcelona’s missions is to support companies and provide leverage to create businesses and opportunities for the country’s productive sectors. In this respect, in addition to the economic return it generates for the attendees of trade shows, the Fira’s own operations have a big impact on certain sectors which, according to the survey, mainly include restaurants, accommodation, technology, retail, leisure, the agri-food industry, real estate business and transport services.
The social values of Fira de Barcelona
Above and beyond its economic impact, the interaction between the institution’s activities and its catchment area give rise to all kinds of benefits that are more difficult to quantify: its social impact and public value. For the first time, Fira has taken a methodological approach to identifying this impact and some of its main potentially measurable contributions to this value as an initial step to a more in-depth analysis in the future. In this respect, the ESADE survey conceptualizes the six main contributions in this field:
– Economic and productive development: Boosting the productive sector by providing opportunities for business and internationalization, fostering entrepreneurship and supporting SMEs and business associations, and driving innovation through the cross-cutting nature of its events.
– Public space: Giving the facilities it manages (around 400,000 sq. m) added value for the general public and at the same time generating an area for socializing and even recreation. The fact that Fira occupies this space for trade and social activities, excluding it from other uses, unquestionably adds value to the city.
– Metropolitan poles of attraction: Through its two venues (Gran Via and Montjuïc), it helps to create two central poles in the city, attracting public activities as well as improving the infrastructures (public transport, connections with the airport, etc.).
– Social cohesion: The nature of its events and its visitors create a vibrant, multicultural experience for participants, a source of added value that can be regarded as a contribution to social cohesion.
– Positioning and identity: Through its activities and power of attraction, its visitors give the city and its metropolitan area a much more international identity as well as important business and entrepreneurial value, thus helping to give a more global image to the city than the conventional tourist one. In the same way that Barcelona lends its own characteristic hallmarks to Fira, the Fira also generates elements of identity for the city.
– Knowledge and innovation: The events hosted by the institution are a source of creation and transfer of knowledge as well as providing a showcase and unique propagator of the latest innovations in the numerous economic and industrial sectors that take part.
Barcelona, 26 October 2015
Communication Area
Fira de Barcelona
Av. Reina Maria Cristina, s/n
08004 Barcelona
Tel. 93 233 20 00
prensa@firabarcelona.com
Previous
Next