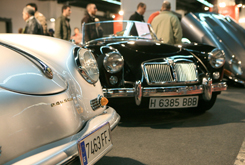 Classic car and motorcycle enthusiasts should be sure not to miss this new edition of Auto Retro Barcelona between 4 and 8 December at the Montjuïc Exhibition Centre. Among the many new features, we have created a new ‘Barcelona Classic Night’ space which recreates a city scene from the 1950s and 1960s.

This area will feature buildings, shops, streets, a fire station, recreational areas and the typical vehicles and motorcycles from that era. SEAT will be the star brand, coinciding with its 30th anniversary celebration in Ibiza.

The show will also be exhibiting hundreds of unique cars such as a collection of exclusive BMWs (Series 5 and models 315, 327 and 328), an Aston Martin DB6, the Mercedes-Benz 300 SL Super Sport, a Hispano-Suiza Alfonso XIII (built between 1911 and 1914), the first Porsche 911 to be registered in Spain, a Ferrari Dino and a Ford Mustang Shelby, amongst many others.

As well as cars and motorcycles, at Auto Retro you’ll also find all kinds of parts and accessories along with numerous activities such as live music, club conventions and a trial show.

This year the show’s poster is dedicated to the Montjuïc urban racetrack. Created by Argentinian painter Juan Carlos Ferrigno, it portrays the Lotus JPS-Cosworth driven by Emerson Fittipaldi on the La Rosaleda curve at the F1 Grand Prix of 1973.

Visitors to Auto Retro, which is organized by Promobil Group, have free entrance to Fira de Barcelona’s Salón Ocasión (nearly-new car fair) which is also taking place at the Montjuïc venue until 8 December.