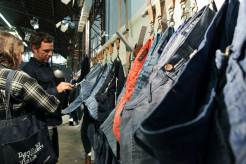 Meeting its objectives, the professional trade show Denim by Première Vision, leader in the jeans fashion industry, closed it second edition in Fira de Barcelona this past Thursday with almost 4,000 visitors from 60 countries, consolidating itself as a meeting point, business venue and source of inspiration for the global ‘denim community’ looking for the most elaborate and sophisticated products to satisfy the industry’s premium segment.

Seventy-two per cent of visitors were international, among them stylists, creatives, designers and representatives of the main haute couture fashion and jeanswear brands, luxury designer labels and large distribution groups. Discovering the latest developments and innovations in denim fabric and manufacturing processes; getting in contact with new suppliers; and finding inspiration in colours, cuts, washes, shapes, finishes and accessories to prepare the collections for spring-summer 2016 were the main reasons for coming to the event, which is a must-attend event for all professionals of the denim production value chain.

With 70% of the total, Europe is the region that provided the most visitors to this edition. Turkey is the second country with the largest number of visitors, following Spain and followed by Italy, the United Kingdom, France and Germany. Once again, a growing interest can be seen from professionals in Northern Europe and Scandinavia, who represented 6% of total visitors. In fact, the first effects of the collaboration agreement between Denim by Première Vision and the Scandinavian fashion show CIFF to promote the event in the Nordic market can be felt.

In parallel, the spectacular growth (+38%) in the number of visitors from North America compared to the November 2013 edition is significant, as well as attendance from the Mediterranean countries of North Africa, with Tunisia and Morocco topping the list.

This 15th edition of Denim by Première Vision had 98 exhibitors, 10% more than the edition held in Paris a year ago in November, coming from 20 countries. The show showcased the technology, latest developments and knowledge of the main companies in the world that manufacture, cut, sow, wash and label denim clothing.

Forty-eight per cent of participating exhibitors produced fabric for the haute couture segment: 22% were clothing manufacturers, ‘washers’ and specialists in finishes; 20% were accessory manufactures; 4% were fibre manufacturers and spinners; and 7% were machinery suppliers, technology developers and promotion organisations.

Almost 60% of the companies participating were from Turkey, Italy and Morocco. The rest of the countries were: Taiwan, Thailand, Pakistan, India, Germany, Hong Kong, Brazil, Denmark, the USA, Tunisia, France, Switzerland, Japan, Austria, Portugal, Belgium and Spain, which supplied 9 exhibitors.

The next edition of Denim by Première Vision, which is a biannual event, will be held on 27 and 28 May 2015, once again in the Montjuïc venue of Fira de Barcelona.