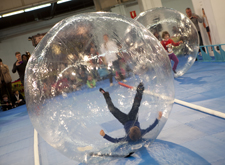 Dozens of activities for all the family

A Christmas full of fun at the Children’s Festival

The Children’s Festival, one of the most traditional events in Catalonia during the Christmas season, is back on 27 December through to 4 January at the Montjuïc venue. Once again, festive fun is guaranteed!

This year’s edition will be putting a particular focus on activities related to technology, the environment and traditional performances. Popular attractions include the 3D Cinema sessions featuring 360º screenings, interactive and sensorial games, the eco-friendly allotment, various live concerts and performances by magicians, puppets and clowns.

Children will also be able to play tennis, football and basketball; practice athletics, climbing and archery; kayak in a big pool and test out their agility and strength on adventure trails. This year also sees another edition of the Molinet Trophy, the oldest mini-basketball tournament in Catalonia and a unique event in Europe.

Since it started in 1963, the Children’s Festival has aimed to entertain and educate the youngest members of society in values such as creativity, solidarity, respect for the environment and civic-minded behaviour. In this respect, it also organizes workshops on recycling, healthy eating and baking, handicrafts and road safety, amongst many others.

This year it is being held at the same time as the XD Young Fest, the new leisure and multimedia experiences event aimed at the youth market (aged over 12).