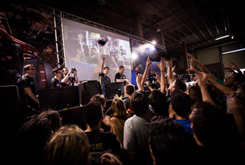 Teens and young people (aged over 12) have got a red letter date in their diaries this Christmas with the XD Young Fest, Fira de Barcelona’s new festival of leisure and multimedia experiences which takes place from 27 December through to 4 January at the Montjuïc venue. The event features a host of exciting activities in the fields of technology, extreme sports, gaming, electronics and new street trends.

One of the star events will be the Audi Mind Race, a spectacular electronic track which lets you race a replica of the Audi R18 e-tron quattro with the power of your mind. There will also be Formula 1 simulators, basketball tournaments using smartballs and wearables and other virtual reality activities.

Those who want to experience some real thrills and get their adrenaline going should visit the X-Sports zone with more than 4,000 sq. m. of indoor tracks and circuits for skateboarding, scooters, BMX and inline skating. There will be areas for both beginners and professionals, the latter featuring top names such as Joan Galcerán (skateboarding), Yuri Botelho (inline skating), Bernat Via (BMX) and Javi Trepat (scooters), amongst others.

Other big attractions will include skimboard, a brand new sport similar to surfing which uses a board to slide over a thin layer of water; bubble football, a brand new activity in Spain which involves playing the king of sports inside a giant bubble; laser combat; an electric go-kart track and a rock-climbing wall with a zipline.

There will also be DJ workshops, electronic music sessions, percussion and urban dance shows, concerts, YouTubers’ conferences and gaming areas featuring the final of the League of Legends.