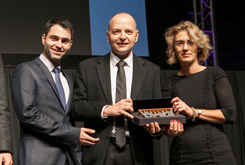 The fourth edition of the Smart City Expo World Congress, the global summit for smart cities organized by Fira de Barcelona, closed this afternoon after having chosen Tel Aviv as the winner of the World Smart City Awards in the category of Best City. In the Initiative and Project categories, the winners were the Omomi mobile app to help parents track their children’s health presented by Nigerian firm Mobicure, and Copenhagen Connecting: Driving Data to Quality Service, presented by the Danish capital. The 2014 event was the most international in its history, bringing together around 400 cities and 41 international delegations.

The decided commitment of the municipal authority of Tel Aviv towards a new and more direct model of relating to its citizens, which takes advantage of the potential of digital technologies and geolocation thanks to the mass deployment of Wi-Fi technology won the city the recognition as Best City in the World Smart Cities Awards presented last night. The jury panel particularly commended the roll-out of the DigiTel model, a platform for transforming the Israeli city into a smart benchmark and a pioneer in new models of public engagement in such key aspects as urban development and participatory budgeting.

In the Projects category, the award went to Copenhagen Connecting: Driving Data to Quality Service, an innovative urban management driven by socio-economic priorities built on open standards and focusing on the use of real-time data from the whole city and its services to constantly adapt citywide operations to the needs of the city’s inhabitants.

The Nigerian firm Mobicure won the top award in the Initiative category for the Omomi suite, a set of tools based on mobile technologies modelled after the World Health Organization’s Childhood Survival Strategies to provide parents in Nigeria the necessary mobile tools to monitor their children’s growth, stay up to date on critical medical milestones, and share knowledge and support with other mothers and fathers in a networked community of users.

Puebla, host of the Latin American edition of Smart City Expo
Fira de Barcelona has designated the Mexican city of Puebla as host for the Latin American edition of the event in 2016. Smart City Expo Puebla will be held in the Puebla Exhibition Centre and the key theme of the event will be Social Equity. Mexico thus joins Japan (Kyoto) and Canada (Montreal) as the countries set to host the next continental editions of the international summit on smart cities.

The Smart City Expo World Congress closed its fourth edition having recorded its best-ever figures, with more than 10,500 visitors, 400 participating cities and 242 exhibitors. The international summit on smart cities will be held for the fifth time in November 2015 at Fira de Barcelona’s Gran Via exhibition centre.