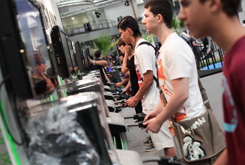 The show is hosting the finals of the PlayStation, GAME E-sports and LVP championships

According to Alberto González Lorca, the president of AEVI, “members of AEVI are committed to ensuring that Barcelona Games World is a success. The trade show will be featuring the industry’s latest products and visitors will have the chance to try them out before they hit the shops. Virtual reality products will be particularly strongly represented. As an industry, we are always looking for new audiences and new markets, and we are confident that BGW will help us achieve this goal.”

Meanwhile, Josep Antoni Llopart, the director of BGW, said he was convinced the show would be a success and confirmed that “we’ve prepared a programme of activities which will ensure that this new edition of the fair will be a benchmark for professionals and gamers alike. BGW will be the biggest and best showcase for showing people what’s new in the lead-up to the Christmas season.”

Live gaming
Barcelona Games World will be hosting some major video game competitions such as the PlayStation League, GAME E-sports and the Professional Video Game League (LVP) which will feature both amateur and professional gaming teams. The tournaments will be held in the arenas in Halls 1 and 2 of Fira de Barcelona’s Montjuïc Exhibition Centre. The winners could take away prize money of up to €15,000 in the case of the championships for professional gamers organised by GAME E-sports.

“The trade show is also providing a dedicated space for national developers, robotics, retrogaming and the Manga culture,’ announced Alberto González Lorca, who also highlighted the fact that ‘the videogames industry has huge potential which we need to give more thought to. That’s why we’re also organising discussion forums at BGW on the industry’s future.”

Tickets on sale
BGW will be opening on 6 October for the press and trade professionals with a full programme of networking sessions, meetings with developers and publishers, and conferences. On 7, 8 and 9 October the venue will be open to the public. Tickets will be on sale from 27 June for 12 euros for early birds or 15 euros at the door. GAME stores are among the official distribution points and will be offering tickets with added benefits.