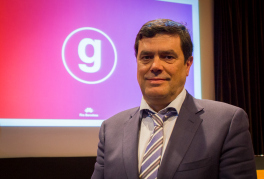 Lluís Giralt Àlvarez, Vice-Chairman of Graphispack Asociación member Agrupación de Suministradores de Artes Gráficas (ASAG) and Director of Fuji Hunt Ibérica (a Fujifilm Europe NV Group company), has been appointed Chairman of the Organising Committee of Graphispag 2017, Fira de Barcelona’s International Graphic and Communication Industry Show, set to be held for the fourteenth time from 21 – 24 March next year. Giralt takes over from Agfa Graphics Director Ángel Artola, who chaired the Show in 2015 and is leaving the post to take on greater responsibility at his company, although he will continue to be a member of the Graphispag Organising Committee.

Born in Barcelona in 1960 and educated at the Salesian Professional School of Sarrià, where he studied Graphic Arts, Design and Printing, Lluís Giralt has more than 30 years’ experience in companies specialising in printing machinery, materials, supports and products for the graphics industry including BASF Drucksysteme, Cominter Paper S.A., Ekman Ibérica S.A., Wiggins Teape S.A., Intersistemas, Kopimask and Sarrió Compañia Papelera de Leitza S.A. Since 2004, the new Graphispag Chairman has been Director of Operations at Fuji Hunt Ibérica, a company based in Bellvei in Tarragona province and specialising in chemical products, inks and other supplies for offset and digital printing and paper and cardboard processing. He is also Sales Manager of Fujifilm Europe NV for the Southern European, Middle East and African markets.
Giralt has been involved in the area of graphics industry associations for over a decade now, holding different posts in the clusters and committees of Graphispack Asociación, an entity bringing together suppliers from the Spanish graphics, packaging and POS industry.
Giralt defines himself as a ‘graphics sector man’ and takes on the Graphispag chairmanship in a year when the show will be highly innovative and will focus on consolidation of the traditional printing and graphic communication industry, showcasing tailored solutions for vertical sectors to which printing adds value such as packaging and labelling, publishing, retailing and document management. The Show will also include a broad-based offer of technology, supports and applications connected with design, advertising and visual communication, textiles and other industrial sectors using green printing, 3D printing and other print techniques. ‘We want this to be a fresh new Graphispag show bringing the huge possibilities of graphic applications to printers and professionals from the new demand sectors, permanently and not just for the few days it is held’, Giralt affirms. With its recently formed Organising Committee, Graphispag is preparing next year’s show with a new participation model for the supply companies which includes staging different activities and events in cities throughout Spain where participants can make contact with the printers and new end customers. Graphispag is organised by Fira de Barcelona in collaboration with Graphispack Asociación.
Barcelona, June 2016
Communication Area
Fira de Barcelona
Av. Reina Maria Cristina, s/n
08004 Barcelona
Tel. 93 233 20 00
prensa@firabarcelona.com
Previous
Next