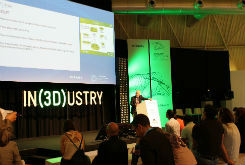 Organised by Fira de Barcelona, the show promotes the use of additive manufacturing

The first edition of IN(3D)USTRY From Needs to Solutions, which closes today after three hectic days of activity, has underlined the fact that the so-called Fourth Industrial Revolution, starring additive manufacturing and the digitalisation of production processes, is already well underway. The event served to showcase the current applications and future challenges of this technology in fields such as architecture, the automotive industry, health and consumer products, and to facilitate business contacts between companies and end users.
The event featured more than one hundred prestigious speakers from a very representative spectrum of the economic and social ecosystem that has flourished around the use of 3D printing. The huge potential of the maker community – the end user – had its own space in the Maker Pro zone where more than 60 projects were on show, while the trade show area featured the leading manufacturers of 3D printers such as HP, Renishaw, Hofman and Arburg, amongst others.
Several business deals were closed at the event which underlines the fact that this new trade fair formula, focusing on 3D applications for industrial sectors, adds even more value to this market. Many of the exhibitors have already said they intend to take part in the next edition of the event on 20-22 June 2017 at Fira de Barcelona’s Montjuïc Exhibition Centre. Of the trade professionals who visited IN(3D)USTRY From Needs to Solutions, 40% were in senior management and 60% were purchasing influencers, which further underlines the importance of the event to the sector.
The director of IN(3D)USTRY From Needs to Solutions, Miquel Serrano, expressed his satisfaction at the fact that “over the course of these last three days, Barcelona has been an international hub of ideas, challenges and solutions in advanced additive manufacturing'” given that “at its first edition the event has managed to highlight the fact that this new manufacturing method is already a fact of life and that Barcelona has all the elements necessary to drive forward this new industrial revolution”‘.
Over 100 experts
The presentations, which attracted big audience numbers among visitors to the show, coincided in declaring that we are on the threshold of a new economic model which will also see the widespread use of open collaboration programmes.
The vice-president and general manager of HP 3D Printing, Ramón Pastor, said in his presentation that “3D printing is transforming industrial production models, heralding a new Industrial Revolution”, which has led his company to commit to this technology with the manufacture of its Jet Fusion system which was given its European launch at the show. In this respect, Google scientist Vinton Cerf, regarded as one of the fathers of the internet, highlighted “collaboration” as one of the keys to this industrial revolution. “Communities are strengthened through open-source coding”, he contended.
The event also demonstrated how additive manufacturing is already revolutionising many industrial sectors. Other renowned speakers, such as architect Xavier de Kestelier, a partner at Norman Foster’s practice, asserted that “thanks to 3D printing we will be able to build on the moon within around 20 years”,  while IKEA designer Mikael Axelsson envisages “huge opportunities in 3D technology for designing, customising and repairing products and giving them a new life”.
In turn, the head of SEAT’s Prototype Development Centre, Cristóbal Gómez, said that “at the moment, additive manufacturing is already being used in the development of functional prototypes, tools and the manufacture of logistics containers”, while Dr Bartolomé Oliver, director of the Neurosurgery Unit at Barcelona’s Teknon Medical Centre, highlighted the fact that “with 3D printing you can create bespoke implants with excellent results for cranial and maxillofacial surgery”. The director of Technology Transfer at Acciona, José Daniel García, noted that ‘with additive manufacturing, if you can design it, you can print it.’
At its first edition, the event enjoyed the support of Barcelona City Council through Barcelona Activa, the Catalan Government through the Secretariat for Governance of Information and Communication Technologies, the Directorate General for Industry, ACCIÓ and the Zona Franca Consortium.
Barcelona, 23 June 2016
Communication Area
Fira de Barcelona
Av. Reina Maria Cristina, s/n
08004 Barcelona
Tel. 93 233 20 00
prensa@firabarcelona.com
Previous
Next