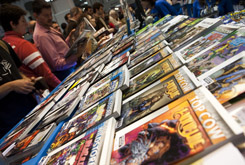 The superheroes and comic strip stars are coming

Comic strip stars will be back at Fira de Barcelona’s Montjuïc Exhibition Centre between 4 and 8 May. The 34th edition of the International Comic Show is an international benchmark in its field and this year presents all the latest news in the genre and hosts numerous activities such as exhibitions, workshops and signing sessions by world-renowned authors.
Of particular note is the ‘Strips on Wheels’ section devoted to the presence of cars, motorcycles and bicycles in comic strips, which is exhibiting 200 original strips from all over the world as well as vehicles.
Other special features include an exhibition to celebrate the 80th anniversary of Francisco Ibáñez, the author of this year’s poster, entitled ‘Ellas tienen superpoderes’ (The Girls Have Superpowers!) about the heroines of comics, an exhibition that takes a look at committed graphic novels, and another on multilingualism in Tintin books.
The show, organised by Ficomic, also offers numerous cultural and recreational activities such as conferences, workshops, round tables, Cosplay competitions, signing sessions with Spanish and international authors and trade meetings between authors and Spanish and foreign publishing houses.
Barcelona, May 2016
Communication Area
Fira de Barcelona
Av. Reina Maria Cristina, s/n
08004 Barcelona
Tel. 93 233 20 00
prensa@firabarcelona.com
Previous
Next