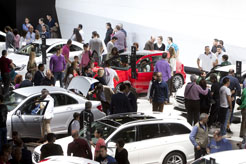 The show featured over 30 unveilings, including two world and four European premiers

The International Motor Show of Barcelona demonstrated its importance for the automotive sector in an adverse economic climate, confirming itself as this industry’s best platform and an outstanding market booster. This was verified by the activities and meetings hosted at the show, the number of visitors and volume of recorded sales. Over 30 unveilings by the 22 exhibitors, including two world and four European premiers, again turned the Fira de Barcelona show into a must for motor lovers.

One of the most relevant moments was the meeting between Mariano Rajoy and the top executives of brands present in Spain (see appendix), in which they discussed the challenges and needs of one of the country’s most important economic sectors, because of its investments and its contribution to the GNP.

The Show’s President, Enrique Lacalle, said “we have accomplished all our planned objectives: to hold the automobile industry’s top event in Spain, presided over by the President of the Government with all the presidents of brands and manufacturers in Spain, turning the Show into the summit of the automotive sector; to contribute to turning Barcelona into the world motor capital thanks to the concurrence with the Spanish Formula 1 Grand Prix and the X-Games, the biggest extreme sports competition in the world; and boosting sales, breaking records in this climate“.

Lacalle added: “the fact that the President of the Government met with the country’s leading industry at the Barcelona show, sounding out its opinions and bearing good news is a very useful precedent for the future“.

The show, which provided the setting for the Department of Motor Vehicles to present their new strategy to rejuvenate the automobile stock, again ratified its status as a leading showcase and the brands recorded important trade activity during the nine-day event, with a high number of visitors.

The Executive Vice President of Anfac, Mario Armero, said the show “has been confirmed as a sector nerve and information centre, demonstrating that the motor industry is capable of firing up the growth engine. Staging the Show at these times was a heroic act and, for this reason, I wish to congratulate Fira and the Organising Committee chaired by Enrique Lacalle“.

Germán López, President of Aniacam, highlighted the importance for the sector of “Mariano Rajoy and Artur Mas’ meeting with the top executives of the automotive industry, which made the Show more relevant, transmitted confidence and received media coverage that attracted more visitors and generated more sales“.

The list of activities hosted at this year’s show included the exhibition dedicated to the 50 years of the Car of the Year Award that, for the first time, showcased 50 vehicles, which have won the award since 1964 for the best performance and quality-price ratio.

Another of the proposed activities was a series of live concerts programmed during the week. As a complement to the trade fair, visitors were able to enjoy performances by artists such as David Bustamante, La Unión and Blaumut.

The biennial show, organised by Fira de Barcelona, has the backing of the leading Spanish automotive associations and is the only event in Spain recognised internationally by the Organisation Internationale des Constructeurs d’Automobiles (O.I.C.A.).

Executives present at the automotive meeting chaired by Mariano Rajoy

5.    Francisco García Sanz, Member of Volkswagen AG Executive Committee and President of the Administrative Board, Seat