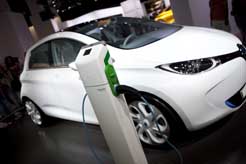 Barcelona will be the world capital of the electric car from November 17th to 20th 2013 when it hosts the first Electric Vehicle Symposium and Exhibition (EVS), the world’s largest event dedicated to giving momentum to sustainable mobility in all its variants: electric, hybrid, plug-in hybrid and fuel cell. For four days, the stakeholders in the entire value chain of this type of vehicle¿ industry, administrations, universities and research centres¿ will meet in the Catalan capital to explore, share and promote the development of the necessary technology to transform the transport sector.

The event is aimed mainly at professionals and will showcase the latest technologies and products developed in this field. In addition to the conference programme, the 27th EVS (EVS27) will feature an exhibition area a “Ride, Drive & Charge” space, in which visitors will be able to try out different electric, hybrid and fuel-cell vehicles, and a specific circuit for two-wheel vehicles.

Thanks to its renowned international prestige and leadership in Europe in promoting and deploying electric vehicles, Barcelona won the bid to host this event over other European cities. The Barcelona edition of the symposium is already beating records: the call for papers has already received the highest number of scientific articles in the event’s history with 541 proposals. The previous edition of EVS was held in Los Angeles (USA) in 2012 and, as the organisational system dictates, the next will be in Asia.

“We organised EVS 45 years ago and it is currently the most important global event of its kind”, says the President of WEVA, AVERE and AVELE, Angel Aghili. “Many of the world’s biggest manufacturers of automobiles will be exhibiting their latest hybrid and electric models. For this reason, in addition to attracting academics, energy suppliers, politicians and government and industry leaders from around the world, the event will also be of great interest to trade visitors”.

Third edition of EXPOelèctric Fórmula-e
In order to promote the use of the electric vehicle among the public and reveal its advantages, EVS27 has signed an agreement with the EXPOelèctric Fórmula-e fair, which promotes energy saving and efficient driving through entertaining, informative activities to establish it as a real alternative in urban and interurban driving. The third edition of this event will be held at the weekend prior to the Symposium, on November 16th and 17th.

Barcelona, a model of electric mobility
Barcelona is committed to developing electric mobility solutions, not only to increase sustainability and improve the quality of life of its citizens, but also as a key element in the global competitiveness of the automotive industry, a strategic sector for the country’s economy, because of its share of the GNP as well as the employment it generates and its stimulating effect on the ancillary industry.

According to Sonia Recasens, Deputy Mayor for Economy, Enterprise and Employment at the Barcelona City Council “the introduction of new technologies in the field of electric mobility, as well as the appearance of new business models and services linked to this sector, opens up new business opportunities for the city and contributes to its international exposure. Barcelona is committed to this new future economy, based on innovative and high value-added solutions, decisive for the competitiveness of our industrial fabric”.

In this sense, according to the Deputy Mayor, “the fact that Barcelona has been chosen to be the European venue of the sector’s most important international event for the first time shows the city’s commitment to the deployment and development of electric mobility, at the same level as other groundbreaking cities in this field, such as Shanghai and Los Angeles”.

Barcelona is a favourable setting for the development of the electric mobility industry. Recent examples are the manufacture of the new electric van in Nissan’s Zona Franca plant, the prototypes Seat has developed in its technological centre that are already being tested in the streets of Barcelona and the activities of start-ups and enterprises, such as eCOOLTRA, IfRenting and the MOTIT BCN system and its Going Green motorcycle factory, which consolidate new companies and business models in the Catalan capital.

In order to reach these agreements, the role of LIVE Barcelona is fundamental. This public-private platform, formed by private and public bodies, including the Barcelona City Council, was founded in 2010. Its aim is to favour the development of electric mobility and to position Barcelona as a benchmark centre in this sector.

The Catalan capital currently has over 250 public recharging points and more than 300 electric vehicles in municipal public fleets. Barcelona also has different ordinances and policies that provide incentives, such as regulated parking zones (Blue and Green Area) free of charge for electric vehicles and reductions on annual road tax.

About EVS
Organised by WEVA, EVS, is recognized as the global electric transportation industry’s premier forum, showcasing all forms of technologies in the market place and on the drawing boards–from small battery-powered electric vehicles to fuel cell electric buses. The event attracts academic, government and industry leaders from around the world who are interested in exploring and understanding the technical, policy and market challenges to a paradigm shift towards use of more sustainable transportation technologies.