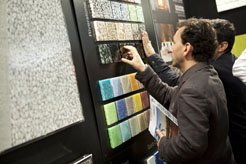 Visitors from 95 countries have participated in this edition of the show, which closes its doors today

12 foreign delegations, comprising 311 representatives from public administrations and company executives, from countries such as Russia, Brazil, Belarus, Mexico, Chile, Colombia, Morocco, Cuba, and the Congo, as well as 1,850 VIP Buyers, have participated in the 18th Construmat, which is closing its doors today having provided an international business platform for Spanish construction companies in a new phase geared towards offering SMEs in the sector practical solutions and business opportunities in emerging countries.

“With this edition that we designed to work shoulder to shoulder with companies in the sector, we have achieved the three objectives we had set: to bring international business to exhibitors to enable them to offset the decline in domestic demand; to bring know how and added value to the show by organising an international congress about construction solutions; and to reclaim the construction industry as one of the drivers of economic recovery and make sure we are heard “, explained Josep Miarnau, President of Construmat.

The visit of the Minister of Cities from Brazil, Aguinaldo Ribeiro, accompanied by a delegation of over 30 construction entrepreneurs, served to present to Spanish companies the Minha Casa Minha Vida project, the world’s largest social housing initiative. “Visiting Construmat is a great opportunity to discover the latest in sustainable construction, also applicable to official protection buildings”, explained Ribeiro.

Construmat launched a new space, Contract Forum, aimed at creating contacts between international demand, especially Latin America and Maghreb countries, and Spanish companies that were able see they are especially competitive in foreign markets thanks to the high technical and innovative level of their products. In this area, 170 construction projects from around the world were put up for tender with a potential investment of 30,000 million Euros and 517 meetings were set up between exhibitors and international buyers.

“We have sown in order to reap”, said José García, sales director of the company from Lerida Domoespais. “We are very satisfied because we have initiated contacts with clients from Colombia, Mexico and Peru, among others”, he added. Javier Rabadán, executive from the Andalusian insulation formwork company Sismo, had this to say about his first participation in Construmat: “We have sold our system to promoters from Brazil, Chile, Peru, Colombia and North Africa”.

The international visitors from 95 countries also ranked highly the possibility of finding new suppliers and materials that are more advanced than those in their countries, especially in the case of emerging economies.  “The Contract Forum is an excellent initiative that allows you to do real business. In Construmat, I have found a lot of innovation, both in products and systems “, explained the Chilean architect, Daniel Morales (Molo Arquitectos).

Advanced innovation
Another new feature at Construmat 2013 has been the Innovation Centre, an area in which new products and materials have been presented prior to being launched on the market, so that companies could form alliances with the most cutting-edge R&D&I centres and, thereby, produce their innovations en masse and open up new business avenues. 14 speakers from twelve technological centres in 10 countries participated in the first know-how and technology transfer forum.

Construmat 2013 also hosted the Building Solutions World Congress, which featured 65 speakers from 15 countries. The event brought to Barcelona not only architects, but also builders and material manufacturers, which allowed everyone to explain how they innovated to construct more sustainable buildings.

During the congress, the Head of the European Commission’s Energy Efficiency Unit, Vincent Berrutto, urged water, gas and electricity supply companies “to invest in energy rehabilitation of buildings” with the aim of helping end consumers to reduce household energy consumption. In this context, the Generalitat presented a road map so that buildings all over Catalonia can reduce energy consumption by 60% during the 2014-2020 period, following the new European Directive.

49,816 trade visitors came to the show, which is undergoing a new phase focused on increasing internationalisation in the sector, and which was two days shorter. The next edition of Construmat will be held from May 18th to 22nd 2015.