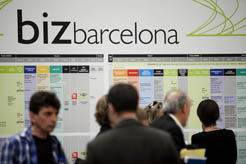 The show hosted over 1,800 meetings between investors and entrepreneurs

Bizbarcelona is established as a business catalyst

In just two intense days, Bizbarcelona has managed to create a climate of real entrepreneurial effervescence in the Montjuïc exhibition centre. The show, which closes its third edition this afternoon, hopes to have a catalytic effect on the economic activity of Catalan SMEs and the imminent start-up of new businesses, contributing to generating employment. In the finance market alone, Bizbarcelona has provided over 1,800 meetings between entrepreneurs and investment institutions with a joint potential credit close to 100 million Euros. Most of the projects presented by new entrepreneurs fall within the following sectors: ICT, industrial, clean technology, electronic trade, health sciences and biotechnology.

“The show’s success reaffirms our decision to support the creation of new businesses and back SMEs and entrepreneurs as drivers of development and economic reactivation”, said the President of the show’s Organising Committee and second deputy mayor of the Barcelona City Council, Sònia Recasens. She also highlighted that the role of the Administration is “to build a smooth and reliable environment for business activity and to articulate, through public-private collaboration, platforms that allow the business fabric to grow and become stronger”. In this sense, Recasens referred to Bizbarcelona as “an excellent tool to contribute to making the city the best ecosystem in which to start innovative projects, retain talent and attract investments”.

The rate of entrepreneurship grows
According to the GEM report presented yesterday at Bizbarcelona, in 2012, 385,900 Catalans were creating a business, which is 7.88% of the adult population in Catalonia. This entrepreneurship rate is 15% higher than in the previous year.

The report highlights the growth in the number of unemployed, who start a business because they need to find a self-employment formula, as well as the average age of entrepreneurs that, for the first time, is over 40. It also indicates the rise in the innovative nature among the 89,400 companies created last year in Catalonia, mainly related to technological sectors. On the negative side, there has been a 36.5% increase in businesses that have closed, due more to a lack of profitability than finance problems.

Bizbarcelona brings together a wide range of organisations and institution that promote business culture and entrepreneurship, such as the Barcelona City Council¿Barcelona Activa, the Catalan Generalitat, “la Caixa”, the Barcelona Diputación and the Barcelona Chamber of Commerce. The next show will be held from June 11st to 12th 2014.