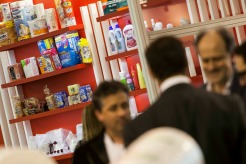 Hispack & BTA closed its third joint edition at the Fira de Barcelona Gran Via exhibition centre this afternoon, confirming a change of trend in the industry and the economy that indicates a recovery. At the closed of this edition, with the final figures yet to come in, both shows are set to reach close to 38,000 trade visitors, 8% more than the expected total. Exhibitors have highlighted the quality of visitors—who, unlike during the economic downturn, have come with definite plans for investment—and the increase in number of foreign visitors, from 112 countries, 10.6% of the total.
The packaging and food technology sectors have witnessed the recovery of the national market at Hispack & BTA, with an excellent response from visitors from all the Autonomous Communities who have come to the show seeking mainly innovation and solutions to improve their firms’ competitiveness and to launch new products, as well as to find out about the latest trends.
The international component has become more prominent at this edition. It is estimated that some 3,800 foreign visitors have been to Hispack & BTA, where some 700 meetings took place between exhibitors and buyers from 29 countries invited by the organization. The aim is to boost exports of both packaging and food technology. Along with European countries such as Portugal, France, Italy, Germany and the United Kingdom, there was a notable increase in the number of industry professionals at this edition, from Morocco, Mexico, Tunisia and Colombia.
In terms of offer, the number of exhibiting companies of both Hispack and BTA have increased. The two trade fairs together drew 1,250 companies, 6% more than in 2012, demonstrating the different stages of food products, from ingredients to equipment and technologies for the manufacturing process, including packages and packaging, logistics and arrival at the point of sale. Likewise, sectors such as pharmaceuticals, chemicals, drugs, perfumery and cosmetics, amongst others, found tailored processing and packaging solutions at Hispack.
The activities programmed for the shows proved very popular. Hispack featured over 200 presentations in its four themed areas (Trendpack, Premiumpack, Retail Area and Pack & Logistic Corner), while at BTA (Barcelona Food Technologies) there were close to 40 sessions on the latest trends in food tech innovation, presentations of new products and round table sessions. The Líderpack Bta. Innova and Bta. Emprende awards ceremonies also took place in the course of Hispack & BTA.
The next joint edition of the International Packaging Exhibition, Hispack, and Alimentaria FoodTech (the new name of BTA) will be in 2018.