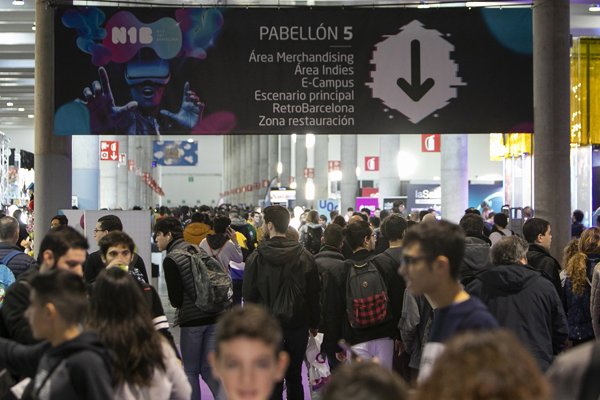 NiceOne Barcelona (N1B), the digital entertainment fest organised by Fira Barcelona, closes its doors this evening at the Gran Via venue after an event that opted for a broad approach, combining immersive experiences and new forms of entertainment such as Technosports with the traditional range of innovations in video games, live eSports professional competitions, talks and cosplay competitions, among many other activities. Although there are no definitive figures yet, over 120,000 people had visited the trade fair by noon today.

Some of the most successful activities for the public were the immersive experiences that transported visitors to two stages of the gamer universe: the Ourang Medan, the ghost ship which is the setting for the video game The Dark Pictures Anthology: Man of Medan, in an activity organised together with the Ministry of Education of the Government of Catalonia and Bandai Namco Entertainment, and the city of the Zombie Shooter Experience, in ruins and infested with the living dead, from which visitors have had to escape using iCombat-type laser weapons brought over from the USA.

Technosports, a discipline that combines sports and virtual and augmented reality, also featured at the first edition of NiceOne Barcelona, the new name for the old Barcelona Games World, and proved very popular among visitors. Attendees were able to take part in games of Hado, a new eSport in which two teams fight for victory by throwing energy balls at each other.

NiceOne Barcelona director Josep Antoni Llopart delivered a very positive assessment of the first N1B and stated that “we opted for a new festival model that is open to new forms of entertainment and we’re very satisfied, because the public has welcomed this new approach with open arms. We achieved this year’s main objective, to broaden our horizons beyond traditional video games by offering more contents and forms of interactive entertainment”.

As for eSports fans, they had the chance to enjoy two live League of Legends competitions: the final stages of the Iberian Cup, organised by the LVP (Mediapro Group), and the Storm Circuit. The winner of the Iberian Cup final between the MAD Lions and Vodafone Giants won’t be known until a few minutes before the trade fair comes to an end, while the winners of the Storm Circuit, the competition for amateur teams, were the Vodafone Giants Academy. Over the last few days, the two live competitions had an audience of more than 500,000 spectators via the streaming platforms on which the different rounds were streamed.

Influencers and retro
The first edition of NiceOne Barcelona also brought together a large number of influencers and content creators who attracted followers and fans. These include Willyrex, Vegetta777, TheGrefg, Wismichu and Anikilo, to name but a few. The first two visited N1B to meet their fans and to present the new image of the MAD Lions team that they own.

Fans of classic and vintage video games also enjoyed RetroBarcelona, the seventh edition of which was held within the framework of N1B. The competition served to commemorate the 30th anniversary of Nintendo’s Game Boy and the 50th anniversary of Konami, the creator of sagas such as Castelvania and Metal Gear.