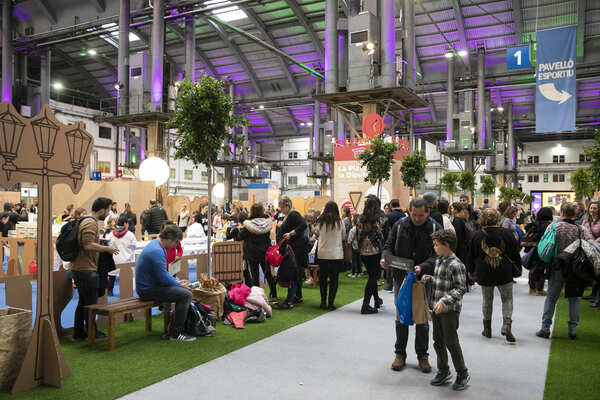 The new Children’s Festival is extended until 4th January

La Ciutat dels Somnis (The City of Dreams), the new Children’s Festival and one of the events not to be missed on Barcelona’s Christmas schedule, returns to the Montjuïc venue with more than 120 activities and experiences for the whole family, and this year the fair will place particular focus on the importance of caring for the environment. Thus, the event will recreate a city where children will be able to learn by playing, involving all kinds of professions, using fun to increase their awareness of the need to care for the planet, in keeping with the Sustainable Development Goals (SDGs) promoted by the United Nations (UN).

The event, which is being extended to enable boys and girls aged 0 to 12 and the whole family to enjoy themselves over the Christmas period, will be held from 27th to 30th December and 2nd to 4th January. The different areas will form an imaginary city for the children to play in and learn about new professions, showing them the importance of caring for the Earth through the 17 SDGs, whose application in their daily work to achieve a sustainable future will be explained by institutions, organisations and companies.

This year’s event will expand its surface area to 17,000 square metres and focus all its activity in Hall 2 and the Plaza Universo so as to facilitate and streamline the visits of everyone who visits the Montjuïc venue during the Christmas holidays.

Núria Basi, President of La Ciutat dels Somnis, stated that “we want to further our commitment to the pedagogical aspect of the event, so we’ll use what’s known as edutainment so the little ones can learn by playing. Along with their families, they can take part in recreational activities, in which we will show them various professions they could dedicate their lives to when they’re older”. She also added that this year “we’ll contribute to raising the children’s awareness of the importance of caring for the planet of today and tomorrow by means of the Sustainable Development Goals”.

Marga Marí-Klose, Councillor for Children, Youth, the Elderly and Functional Diversity on Barcelona City Council, commented that “Barcelona City Council continues to support The City of Dreams to enable children to view the city as a place of opportunities, making them aware that there are lots of professions and trades they can develop throughout their lives. This year it places particular emphasis on children being able to make their voices heard and reflecting on the Sustainable Development Goals. The contributions made by the children will be compiled and assessed in order to implement them as much as possible.”

Playing grown-up
In line with the last two fairs, La Ciutat dels Somnis will build an imaginary city for the children to discover, through play, what they want to be when they grow up. Thus, they’ll be able to stroll along the streets, where there’ll be different places which recreate a city, such as the City Hall, the Provincial Council, a nursery, a supermarket, a veterinary clinic, the cinema, the port, the fair, a technological park and a large sports area, among other facilities for citizens, and where they can exercise the professions they may choose in the future.

Thus, by means of more than a hundred activities, the children will discover their vocation whilst having fun. In this regard, they’ll be able to play at being detectives with an escape room, in which they’ll have to solve a mystery, or at being writers in the atelier, among other activities, and they’ll also have fun on the large festival stage, where they’ll be able to sing, dance, play the guitar and play at being rock stars together with their families.

As well as all this, they’ll be able to take part in a showcooking session to learn how to cook and to get to know more about the various professions involved in the world of gastronomy; they’ll learn how a supermarket operates and play at being ushers in a cinema or at being waiters by taking part in tray-carrying races.

The festival will also have a track where the children and their companions will be able to learn more about the benefits of smart mobility on board electric scooters, raising their awareness of the importance of environment-friendly and non-polluting mobility and teaching them road safety rules.

Similarly, as in previous years, the Barcelona City Council area will encourage children’s participation by means of the representation of a plenary session, where they and their families will be able to learn how a session works and find out more about the services that city councils offer their citizens. The activities to be found here include the area devoted to children aged between 0 and 3, the holding of a plenary session, a robotic play area for those aged between 4 and 9, reality for those aged between 10 and 14 and the Balcony on which children can announce their proposals.

Another of the great attractions at this year’s La Ciutat dels Somnis is its large sports area, where children will be able to enjoy their favourite sports. Thus, there will be a multi-sport area with demonstrations of inclusive sports and the children will be able play football and rugby and do taekwondo, among other disciplines. This area will also have a skate park, a giant table football table, a court for teqball (table tennis played with a football), a mini tennis court and a badminton court.

The FC Barcelona Foundation, RCD Espanyol and the Catalan Sports Council will have a significant presence with their respective playing fields, where they will spread the values associated with playing football, including effort, respect for the opponent and solidarity, and once again promote women’s football with matches and games. A court for traditional games, a bicycle track and facilities for athletics will complement the range of sports on offer in this area of the festival.

Sustainability and solidarity
In keeping with the Sustainable Development Goals, the event will apply several measures, such as the elimination of carpeting in the aisles and communal areas, the use of recycled paper for the invitations and registrations, the creation of stands with reused materials and the withdrawal of plastic bottles and glasses, among others.

In addition, this year La Ciutat dels Somnis is cooperating with Soñar Despierto (Daydream), a foundation which works with several centres that house minors under the State’s guardianship. Its main objective is to ensure that all children have equal opportunities, regardless of their socio-economic circumstances. It has therefore launched the #SomnisChallenge on its social networks, an initiative that invites people to share an image of them giving a hug. The event will donate one euro to one of the programmes run by this foundation in Barcelona for each post.

The solidarity aspect of the festival is also reflected in the donation of more than 2,500 free invitations to Barcelona City Hall so that the Council can distribute them among various social entities that work with disadvantaged families, enabling boys and girls with fewer resources to visit La Ciutat dels Somnis and enjoy the activities on offer at the festival during the school Christmas holidays.

The new Children’s Festival will remain open from 10:00 am to 8:00 pm from 27th to 30th December 2019 and 2nd to 4th January 2020. In addition, La Ciutat dels Somnis, organised by Fira de Barcelona, receives the support of Barcelona City Council, the Catalan Government and Barcelona Provincial Council and the cooperation of more than 40 companies, entities and organisations.