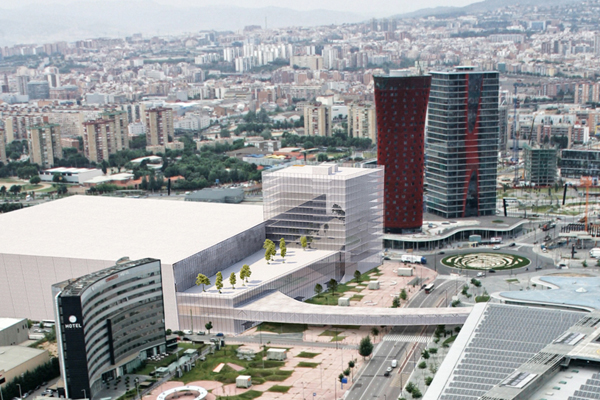 The planned enlargement of Fira de Barcelona’s Gran Via venue, which will mean a 25% increase in its surface area, allowing the trade fairs currently held there to grow in size and lead to new events being attracted, will generate an annual economic impact totalling 675 million euros in Catalonia between 2024 and 2028. These are the results of a study carried out by the IEB (Barcelona Institute of Economics) of the UB (University of Barcelona), which also forecasts an additional impact of 211 million euros during the construction period.

The enlargement project for Gran Via, which currently has a gross exhibition area covering 240,000 m2, envisages the construction of a 60,000 m2 two-storey building, which will link up with the main venue by means of an overpass, as well as a building for offices and event-related services. With this project it will expand by 25%, with a surface area totalling 300,000 m2, and it will be among the most important trade fair facilities in the world in terms of space, functionality, technology, innovation and sustainability. The construction is expected to be completed by 2024 and will involve an investment of 200 million euros.

On 28th November the Shareholders’ Meeting of Fira 2000, the company responsible for managing the works, approved the new financial project for the enlargement of the Gran Via venue and the remodelling of Montjuïc. The institutions that form part of the company (the Catalan Government, Barcelona City Council, Barcelona Provincial Council, the Metropolitan Area of Barcelona, L’Hospitalet Town Council and the Barcelona Chamber of Commerce) are thus supporting this great trade fair infrastructure plan, which seeks to allow the growth of Fira de Barcelona’s own events as well as external events, competing with the most important trade fair facilities in the world, attracting large international events and hosting them at the same time.

Job creation and fiscal impact
In this regard, according to the study by the IEB (Barcelona Institute of Economics) of the UB, the increase in trade fair activity will result in a 16.5% upturn in the business creation of the participating companies, a 12% rise in operational costs and a 9.2% increase in exhibitor and visitor expenditure.

Thus, the annual economic impact between 2024 and 2028 is expected to amount to 675 million euros, taking into account the direct, indirect and induced effects which, in turn, will generate a GAV (Gross Added Value) for the Catalan economy estimated at an annual average of 316 million euros. In addition, 5,048 full-time jobs are expected to be created each year, with 163 million euros per year in wages and salaries and average annual tax revenue totalling 129 million euros for the public purse.

More specifically, the report indicates that 491 million euros of the total impact will come from the business creation of the participating Catalan companies, 139 million euros from visitor and exhibitor expenditure and the rest from the increase in Fira de Barcelona’s own operational costs. Most of the above (62%) will go to the service sector and 32% will be assigned to the industrial sector.

The report has been drawn up by IEB researcher and UB (University of Barcelona) professor Gemma Garcia, together with UB lecturer Núria Bosch and UB professor Cristina de Gispert, who are also researchers at the IEB.