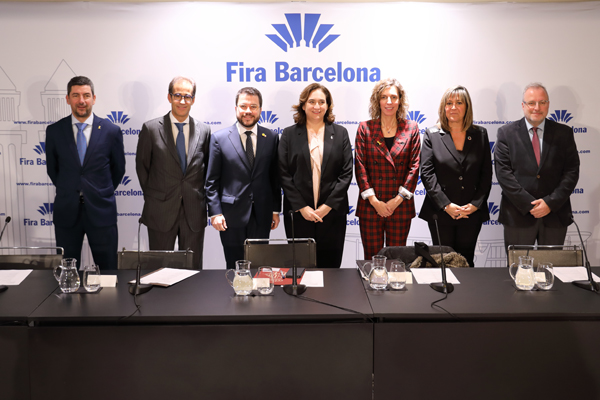 The enlargement of the Gran Via venue and the planned management of the CCIB, clear undertakings for the future

Fira de Barcelona continues to break records in terms of turnover and expects to end 2019 with income totalling over 215 million euros and an Ebitda of more than 25 million euros, figures significantly higher than those originally forecast. The outstanding contribution of external events organised by other operators and the positive development of Fira de Barcelona’s own events, together with its commitment to activity in other countries, have enabled the institution to once again record extraordinary results, reaffirm its leadership in the trade fair sector and enhance its economic and social contribution to the territory.

2019 has been a year of highs in terms of turnover and activity for Fira de Barcelona. The institution expects to end the current financial year with income totalling 215 million euros, a figure 12% higher than that budgeted and almost 15% higher than in 2017, a comparatively similar year in terms of the trade fair calendar. The estimated Ebitda will exceed 25 million euros, an increase of 22% in comparison with 2017. The variation with regards to 2018 is due to the effect of the different product portfolios from one year to the next.

The main figures for 2019 and the forecasts for 2020 were presented today by Pau Relat, Chairman of Fira de Barcelona’s Board of Directors, and Constantí Serrallonga, the Managing Director, during the meeting of the institution’s General Council, chaired by Ada Colau, the Mayoress of Barcelona, with Àngels Chacón, Minister for Enterprise and Expertise of the Catalan Government, and Joan Canadell, Chairman of the Barcelona Chamber of Commerce, acting as vice-presidents.

During the presentation of this balance sheet to the media, which was also attended by Pere Aragonès, Vice-President of the Catalan Government and Minister for Economy and Finance, and Núria Marín, Mayoress of L’Hospitalet and President of Barcelona Provincial Council, value was placed on the ambitious plan for the fairground infrastructures and the institutional support for their financing.

Positive evolution of the business
Pau Relat, who was appointed Chairman of the Board of Directors almost a year ago, pointed to “the important economic and social asset that Fira de Barcelona constitutes for the territory” and underlined “the magnificent results in 2019” , much higher than those initially forecast, “within a complex context of strong trade fair competition in which the institution is seeking to strengthen its international positioning as a result of the increases in its activity and exhibition space”. He also emphasized that “the trade fair business, like any other economic activity, requires normality, institutional stability and serenity within a climate of dialogue and understanding”.

For his part, Managing Director Constantí Serrallonga explained that the record income forecast for this year, despite there not being any triennial trade shows, is based on the excellent performance of external business, in other words, the events held at the Montjuïc and Gran Via venues by other operators, and the favourable development of Fira de Barcelona’s own business, complemented by its commitment to activity in other countries with the aim of accompanying businesses, especially SMEs, in their success abroad.

Major medical and industrial events
In this regard, he underlined the outstanding contribution to the 2019 results of well-established events in Fira de Barcelona’s portfolio such as Smart City Expo World Congress, Valmont Barcelona Fashion Bridal Week and Piscina & Wellness, and in particular, in addition to MWC Barcelona, travelling trade fairs such as Itma (the most important trade fair in the world for the textile industry) and medical events such as the World Lung Cancer Congress and the European trade fairs devoted to Diabetes, Urology, Gastroenterology and Oncological Medicine, among others.

In addition, Serrallonga highlighted “the financial and organizational stability of Fira de Barcelona, which, in addition to being self-financing, allocates a large part of its resources to investing in technology, infrastructures, new trade fair products and initiatives to facilitate sustainable development”. In this regard, he placed particular emphasis on the institution’s commitment to contribute to the UN’s SDGs (Sustainable Development Goals) and integrate them into its strategy and activity. A commitment that has been embodied in 2019 with different actions carried out at the trade fairs, such as the Towards Zero Waste initiative promoted by Smart City Expo and Piscina & Wellness, among other events, to reduce waste and promote the efficient use of resources.

More than 150 trade fairs, congresses and other corporate, social and cultural events have been held in 2019, as well as nearly 1,100 activities organized within the framework of the trade fairs. In addition to those already mentioned, this year we should highlight the centenary of Automobile Barcelona and the latest Barcelona Industry Week, whose central pillars were the IOT Solutions World Congress and Industry trade fairs, as well as Barcelona Building Construmat, the Boat Show, Ensenyament, B-Travel, Manga, Comic and Meeting Point. It is also worth mentioning the launch of the Retail & Brand Experience World Congress and the first Fórum Gastronòmic Barcelona, co-organised by Fira de Barcelona, as well as the holding of important technological events such as Cisco Live, VMworld, Linux and SAP TechEd.

Similarly, the continuity of Ibtm World, the leading business tourism trade fair, until at least 2022 has been announced, together with the holding of Seafood Expo Global/Seafood Processing Global, a global benchmark for seafood products, from 2021 onwards, the year in which ISE, the most important event for the audiovisual industry, will take place.

2020: good prospects, new projects
The forecasts are also very positive for 2020 and the turnover is expected to exceed 205 million euros. According to the managing director, the threshold of 200 million euros recorded in 2018 will mark the course for the institution’s income in the coming years. “Although we wanted to draw up a prudent budget in light of the complex socio-economic environment, the expectations are very favourable, as confirmed by the major events to be held at our venues, the infrastructure projects underway and the future management of the CCIB (Barcelona International Convention Centre) from 2021 onwards”.

It should be recalled that Fira de Barcelona, with the aim of gaining competitiveness and enhancing its international positioning, has set in motion a strategic plan for its venues, backed by Catalan institutions by means of Fira 2000, envisaging the study of a project to remodel Montjuïc by 2029 and enlarge Gran Via with additional 60,000 m2 by 2024. The signing, in late November, of the shareholder plan to allow the financing of the planned works reaffirms the institutional commitment to this great trade fair infrastructure project.

Within the framework of its innovation strategy, Fira de Barcelona will launch a new trade fair in 2020: Barcelona Wine Week, devoted to the Spanish wine industry, and will also work towards a new project in line with the institution’s commitment to contribute to the SDGs.

In 2020 Fira de Barcelona plans to further its activity in other countries and co-organise a total of 16 trade fairs, six of them new ones: Smart City Expo in Santiago de Chile, Piscina & Wellness and Automobile in Mexico and CubaIndustria, IT and Transport & Logistics in Cuba. These new trade fairs will join the Smart City Expo events in Curitiba (Brazil), Atlanta (USA), Buenos Aires (Argentina), Mérida (Mexico), Doha (Qatar) and Kyoto (Japan), Alimentos Cuba, Energías Renovables Cuba and Fecons Cuba and ExpoAntad & Alimentaria México.