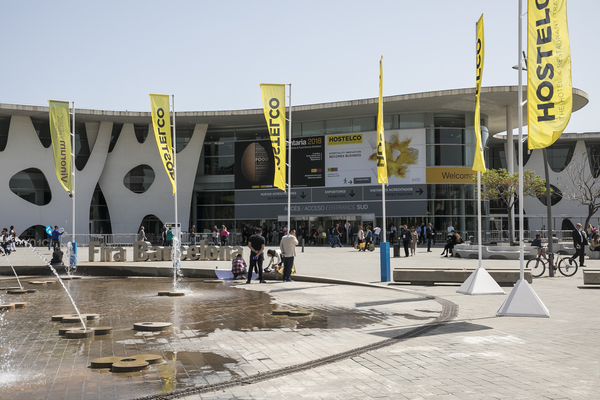 Hostelco, the International Trade Fair for Equipment for Catering, Hospitality and Collectives, is renewing the conceptualisation of its offer in order to combine synergies with Restaurama, the area of Alimentaria devoted to Food Service. It will also integrate new activities dedicated to the dissemination of knowledge, with a focus on hospitality business, interior design and generation of experiences. The fact that it will be held beside the Alimentaria trade fair will turn the two events into one of the largest trade fair platforms for the hospitality and food worlds.

Hostelco, organised by Fira de Barcelona and the Spanish Federation of Associations of Equipment Manufacturers for Hospitality, Collectives and Related Industries (FELAC), is preparing the next trade fair, to be held from 20th to 23rd April 2020 at the Gran Via venue alongside Alimentaria.

Hostelco has opted for a new layout of the exhibition area, designed to achieve greater integration with Restaurama, the section of the Alimentaria trade fair devoted to catering and food outside the home, thus shaping the largest international platform for products and services for the Hosptality sectors.

Thus, according to the forecasts, Hostelco, which has already assigned 70% of its planned exhibition area five months before it is due to be held, and Restaurama will occupy more than 30,000 m2, bringing together the offers of around 800 exhibiting firms, 27% of them international, and they will be visited by 47,500 professionals from the Hospitality sectors, including more than 1,800 guest strategic buyers from 77 countries.

A major part of what Hostelco has to offer will be made up by the Fully Equipped sector, with catering equipment and machinery, and the area devoted to household goods and table setting. Products and equipment related to coffee, pastries, bakery items, pizza and ice cream (Moments) are recording very high rates of participation and dynamism. With Atmosphere the trade fair is renewing its pledge to articles related to interior design, decoration, lighting, furniture and wellness. At the same time, technological and entertainment geared products (Tech) and the sector devoted to transport, delivery and vending (Everywere) are registering very satisfactory levels of participation. Thus, 66% of the platform comprising Hostelco and Restaurama will be occupied by equipment products.

More than 30 chefs in The Experience Live Gastronomy
Hostelco and Restaurama will share some of the most significant activities set to take place within the framework of the event, including The Experience Live Gastronomy, an event conducted by more than 30 highly prestigious chefs. The show-cookings, workshops and talks will focus on the value of sustainable cooking and its close relationship with the territory, local products and the recovery of culinary traditions from different regions. The Experience will also host the finals of major international competitions such as the Chef of the Year Competition and the Waiter of the Year Competition.

Interior design to generate experiences
Hostelco will launch a new exhibition area, devoted exclusively to the creation of environments and interior design for hotel establishments, restaurants, cafés and other areas of the Hospitality sectors. This new space, known as Atmosphere, will reproduce a Showroom with products for lighting, textiles, decoration, furniture and wellness so as to recreate comfortable environments. Atmosphere will also host Hostelco Live Hotel and Hostelco Live Restaurant, which will reproduce the main rooms of a hotel and a restaurant, and the Hostelco Live Arena, a space set aside for debate that will host talks by experts from the hospitality industry and the contract sector to analyse the current situation and the chief future challenges facing the world of design and interior decorating, as well as the role of the latest technologies. It will be attended by professionals from the Spanish Confederation of Hotels and Tourist Accommodation and the Hotel Technology Institute (CEHAT-ITH), partner entities of Hostelco that will propose new approaches to key topics concerning the hotel industry such as customer experience, technological innovation, marketing and sustainability.

In addition, the trade fair will once again host the Hostelco Awards to acknowledge excellence and innovation in nine categories related to different projects, products and services within the Hospitality sectors. The jury, made up of professionals from the sector and chef Carme Ruscalleda, the event’s godmother, will present the awards on 20th April during the trade fair’s gala evening, which will bring together professionals, entrepreneurs and operators from the sector. Candidatures will be accepted until 14 February 2020.

The Spanish hotel and catering equipment industry grows by 5%
According to the 2018 economic study conducted by the Spanish Federation of Associations for Equipment Manufacturers for Hospitality, Collectives and Related Industries (FELAC), the global turnover of the 132 companies comprising this collective increased by 4.84% and totalled 1,789 million euros, thus accumulating a series of six years of growth. Sales in the Spanish market, which stood at 926.5 million euros in 2018, rose by 6.96% with respect to 2017. A more modest increase was recorded by sales abroad, which totalled 862.5 million euros, 2.65% more than the previous year. As a result, the overall export share stood at 48.2%.

According to Rafael Olmos, President of Felac and Hostelco, an economic snapshot of the sector proves positive: “The figures for 2018 demonstrate the good progress of the hotel and catering equipment industry, which has once again increased its turnover, accumulating six consecutive years of growth. Good results achieved”, he added, “thanks to the dynamism of the domestic market and the strength of sales abroad, which, despite more moderate rises, have a fundamental influence on the turnover of an industry that exports more than 48% of its products”. Olmos also highlighted “the record numbers of foreign tourists in 2018” among the factors that have contributed to the positive evolution of the equipment sector and stated that “Hostelco reflects the market’s excellent performance and everything points to the next trade fair once again being the most important event on the trade fair calendar for all the professionals in the Hospitality sectors”.

Hostelco and Alimentaria combine synergies
Organised by Fira de Barcelona and FELAC, Hostelco will be held alongside Alimentaria from 20th to 23rd April 2020. The two trade shows will occupy practically the whole of Fira de Barcelona’s Gran Via venue, in other words, a net surface area totalling around 110,000 m2. The joint holding of Hostelco and Alimentaria will once again constitute one of the largest international platforms for the food, gastronomy and hotel and catering equipment industries, as it will display the most comprehensive and crossover range of products in the domestic and international markets both in distribution and the hospitality sectors.