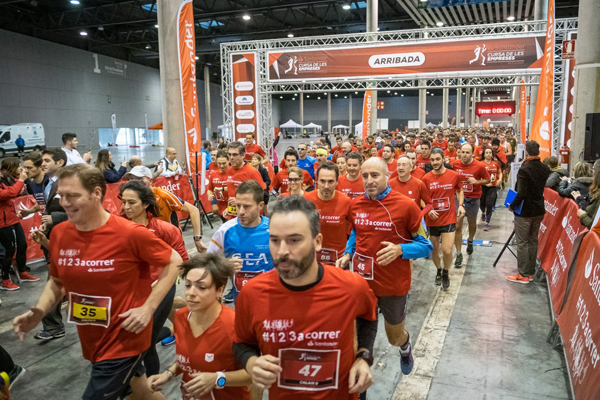 The former world marathon champion, Martín Fiz, participates once again in the event

For the fourth consecutive year Fira de Barcelona is taking part in the organisation of the ‘La Cursa de les Empreses’ as the main partner of an event that will bring together more than 3,000 athletes representing over 250 companies this Sunday, 15 December.

As part of its policy to promote sport among its employees through various initiatives, Fira de Barcelona is partnering this event by providing it with its indoor facilities at the Gran Via venue. The competition’s two routes of ten and five kilometres, respectively will pass through three kilometres of the venue.

La Cursa de les Empreses has different categories, ranging from the individual professional category to the category for mixed teams made up of four runners. In the professional category, the athletes, who can wear sports shoes, will have to run in the outfit or uniform of their profession, which means it will be possible to see executives, firefighters, police officers and doctors taking part in the race. Thus, around twenty Fira de Barcelona workers have registered for this year’s edition, which is expected to bring together more than 3,000 participants from more than 250 companies and which has a charitable side through helping people at risk of social exclusion through the donation of all types of sports clothing and footwear which will be collected by the Arrels Foundation.

Fira de Barcelona will provide organisers of the event with the venue’s Europa Hall on 13th and 14th December where the registered runners can collect their bib numbers and receive a 2×1 invitation to attend La Ciutat dels Somnis (The City of Dreams), the new Children’s Festival.

In this regard, Fira de Barcelona’s Business Director, Salvador Tasqué, has stated that “with our collaboration in the organisation of this event, we highlight the fact that Fira supports companies and sport”. Tasqué emphasised that “our commitment goes further, as we encourage the practice of sport among employees and support grassroots, inclusive and amateur sports. Thus, Fira de Barcelona sponsors the Barcelona Marathon and Half Marathon, football clubs such as Catalonia UB, and cycling clubs such as Galvesport, among other initiatives.

The next edition of ‘La Ciutat dels Somnis‘ will be held along the same lines. An event that will include more than 20 activities to promote the values that practising sport transmits to children, with the presence of entities such as the FC Barcelona Foundation, RCD Espanyol, Real Club de Polo and Joventut de Badalona, among others.

Former world marathon champion, 56-year-old, Martín Fiz, is taking part in this race for another year running, after his participation, for the first time, in last year’s race.