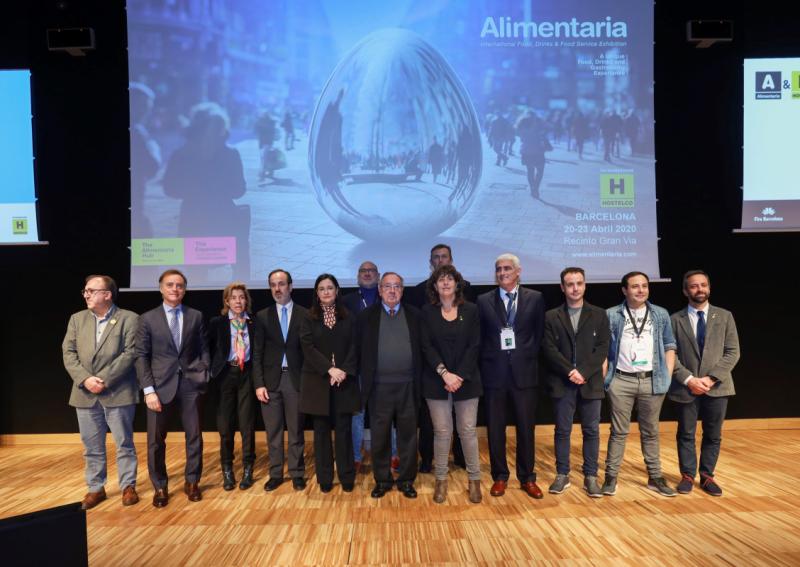 Expanding the presence of exhibitors and professional visitors from all over the world, promoting commercial exchanges and projecting gastronomy as a differential value are the priorities of the International Food, Beverages and Food Service Trade Show, which will take place from 20th to 23rd April 2020 at Fira de Barcelona. As in previous editions, Alimentaria 2020, which has already contracted more than 92% of its exhibition space, will be held alongside Hostelco to offer the food and catering equipment industry a great platform for internationalisation, business and innovation.

Five months before the event, more than 92% of the 110,000 m2 of exhibition space at Alimentaria 2020, practically the entire Gran Via venue of Fira de Barcelona, has been taken up. This record number confirms the excellent expectations generated by the event, which is consolidated as one of the leading events for food professionals in the world.

In the next edition, Alimentaria aims to increase the levels of internationalisation of its previous edition, which welcomed 4,500 exhibiting companies, 1,000 of which came from 70 countries, and around 150,000 visitors, 30% of them international, from 156 countries.

Josep-Lluís Bonet, Chairman of the Alimentaria Organising Committee, Honorary President of Freixenet and Chairman of the Spanish Chamber of Commerce, emphasises “the show’s strong international attraction and its effective role in boosting the exports of companies in the sector and providing them with new opportunities”.

The area that brings together the majority of the event’s foreign offer, International Pavilions, has already sold more than 80% of its space, an unprecedented figure that doubles that reached in the same period in previous editions. Greece, Canada and Japan will be exhibiting for the first time, and among the official pavilions that will be participating once again are those of the United States and Israel, which have increased their areas by 20% with respect to 2018. Italy, Germany, Portugal, Belgium, Romania, Poland, Morocco, Argentina, Ecuador, Colombia, China, Korea, Indonesia and Thailand, among others, will also have a significant presence.

In this regard, J. Antonio Valls, Managing Director of Alimentaria Exhibitions, emphasises that “this year’s international focus is reinforced, especially in the exhibition area, with a significant increase in the participation of countries both in International Pavilions and in the sectoral shows, with a large demand for space”.

With the challenge of revalidating the 12,500 + business meetings that took place in the previous edition of Alimentaria, the Hosted Buyers loyalty and invitation programme has selected 680 key buyers, importers and distributors from strategic countries from five continents so that they can attend the show. Almost one third of them come from Asia, with China and Hong Kong, South Korea, and Japan as the main countries of origin, with the confirmation of firms such as Cofco, Bidfood Asia, Sodexo and Continental Fine Foods, among others. Europe is the second largest geographical area for its number of invited buyers, closely followed by North America (the USA, Canada and Mexico). A noteworthy group of Latin American buyers will also be invited, together with guests from Africa, Australia and New Zealand.

In addition, the collaboration agreement signed between Alimentaria Exhibitions and the European Sales & Marketing Association (ESMA), the largest association of distributors and producers in Europe, ensures the attendance of numerous professional members of this organisation. Similarly, Alimentaria Exhibitions’ partnership with the Latin American Supermarket Association (ALAS in its Spanish initials) reinforces the show’s privileged position in Latin America and encourages visits from buyers from this geographical area.

The partnership agreements between Alimentaria and the Ministry of Agriculture, Fishing and Food (MAPA in its Spanish initials), ICEX España Exportación e Inversiones (Spanish Foreign Trade and Investment Institute) and the Federation for the Food and Drinks Industries (FIAB in its Spanish initials), among other highly represented sectoral entities, are a decisive factor in attracting exhibiting companies and international visitors.

A showcase of trends for all sectors

Additionally, Grocery Foods will bring together the main consumer goods companies, International Pavilions will bring together all the foreign suppliers, while Lands of Spain will do the same with the national production of the various Spanish Autonomous Communities. Alimentaria’s ten shows will exhibit their launches and point out the main trends in the food and beverage industry.

Promotion of the interrelationship between Alimentaria and HOSTELCO

The trade show activities will promote innovation in the sector and will look to encourage the interrelationship between the food, gastronomy and tourism industries, with an emphasis on sustainability regarding its processes and products.

Together with HOSTELCO, the International Exhibition of Equipment for Catering, Hospitality and Collectivities, will reflect a much closer integration of the Food Service offers. For the second consecutive edition, both events will offer both the distribution as well as the Horeca channel the most complete and cross-sectional offer for the food, gastronomy and hotel and restaurant services industry, and will jointly organise activities of significant added value such as the Experience Live Gastronomy event, a space for workshops, presentation and cooking shows.

Similarly, the Alimentaria Hub area will be dedicated to innovation, knowledge and entrepreneurship, based on congresses, lectures, conferences, fast talks and exhibitions. This space will return as the host of the Innoval and Best Awards Exhibitions, as well as the International Conference on the Mediterranean Diet, The Nestlé Conference on Creating Shared Value and the sessions organized by FIAB and AECOC. Moreover, the newly created area Digital Food Arena will unite the most disruptive companies and the most cutting-edge start-ups in the sector.