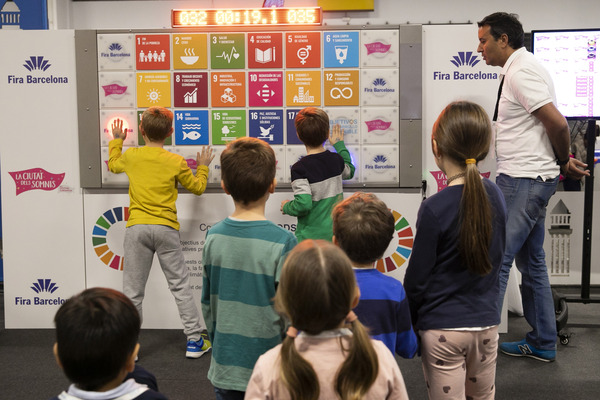 The third Children’s Festival known as La Ciutat dels Somnis (The City of Dreams), one of the events not to be missed during the Christmas holidays in Barcelona, comes to an end this evening, having consolidated its new format that combines fun, education, games, sports and values. In this year’s edition of La Ciutat dels Somnis, which has taken place from 27th to 30th December and 2nd to 4th January with more than 120 activities and experiences for the whole family, the core theme has been the dissemination of the SDGs (Sustainable Development Goals) of the United Nations.

The event, whose length has been extended to enable children up to 12 years of age and their families to enjoy themselves during the Christmas holidays, has recreated an imaginary city covering 17,000 square metres of Hall 2 and the Plaza del Universo, where institutions, organisations and associations have demonstrated how a more sustainable future can be achieved by means of the SDGs. With just a few hours to go before the closure, the organising committee of La Ciutat dels Somnis estimates that around 35,000 visitors have attended.

Núria Basi, the president of La Ciutat dels Somnis, has expressed her satisfaction with this year’s event, in which “we’ve opted for an innovative model that combines fun and pedagogical training through “edutainment” to enable the children to learn while they play”. Ms Basi has also highlighted “the fact that the event has helped to disseminate the Sustainable Development Goals” among the visitors. Thus, La Ciutat dels Somnis has presented a hall design in which 40% of the materials used have come from recycling, the carpeting has been removed from the aisles and common areas, recycled paper has been used for the invitations and passes and plastic bottles and glasses have been eliminated to promote sustainability, among other initiatives.

The hundred-plus activities that have been scheduled to allow the children to play at imagining their future as adults have included spaces recreating a city, including City Hall, the Provincial Council, a nursery, a supermarket, a veterinary clinic, a cinema, a port, a trade fair, a technological park and a large sports area. In this regard, thousands of boys and girls have flocked to the stands of the FC Barcelona Foundation, RCD Espanyol and the Secretariat General of Sport and the Multi-Purpose Court, where, apart from playing their favourite sports, they have learnt more about the values involved, such as making an effort, respect for one’s opponent and solidarity. Other attractions that have been well-attended are the smart mobility track for electric scooters, the escape room, the atelier and the festival’s huge stage.

This year, to promote solidarity, La Ciutat dels Somnis has partnered the Soñar Despierto (Daydream) Foundation, delivering more than 2,500 invitations to social entities whose aim is to help the most disadvantaged families and donating some of the materials used at the event and different school materials to associations linked to childhood and adolescence.

La Ciutat dels Somnis, organised by Fira de Barcelona, has received the support of Barcelona City Council, the Catalan Government and Barcelona Provincial Council as well as being in run in partnership with more than 40 companies, entities and organisations.