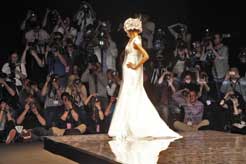 The 24th edition will be held from May 6th to 11th

Fira has taken over the organisation of BCN Bridal Week

Fira de Barcelona will be organising Barcelona Bridal Week, after reaching an agreement with the Associació Moda Barcelona and Flaqué Internacional, in charge of the event until now. The trade fair institution will take over the 24th edition of this prestigious bridal fashion week planned for May 2014, which includes Noviaespaña and Pasarela Gaudí Novias.

From now onwards, Fira de Barcelona, which has hosted various editions of Barcelona Bridal Week, will be in charge of organising one of the most relevant bridal fashion events, taking over from the Associació Moda Barcelona and Flaqué Internacional after 23 successful editions, with the aim of consolidating the prestigious show as leader in an industry of great importance in the country and boosting its internationalisation. The Catalan Generalitat and the Barcelona City Council will continue to support Barcelona Bridal Week in this new phase.

At the last edition, more than 16,000 trade visitors, about 60% of them foreign, and 200 leading world brands participated in the International Noviaespaña Show. 9,300 people attended the Pasarela Gaudí Novias shows, in which leading creators of bridal fashion showed their great vitality, creativity and quality. Noviaespaña 2014 will take place from May 9th to 11th and the Pasarela Gaudí Novias shows from May 6th to 9th.

This will be added to Fira de Barcelona’s portfolio for 2014, a year in which over 55 shows and events are planned, such as Alimentaria, Mobile World Congress, Smart City Expo, Hostelco and Expoquimia, among others.