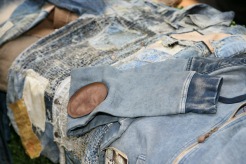 The international textile industry opts for the Catalan capital yet again

Next year, Fira de Barcelona will host Denim by Première Vision, the leading Denim trade show that, until now, has been held in Paris. After having reached an agreement with Première Vision S.A, the event’s organiser, the first edition in the Barcelona trade fair institution will be held in the Montjuïc exhibition centre on May 21st and 22nd 2014 and the second in November. This year’s winter edition that will be held on November 27th and 28th in Halle Freyssinet, is the last one that will take place in the French capital.
Chantal Malingrey, Director of Denim by Première Vision, said that the choice of Barcelona is due to the show’s international aim to target professionals from different countries and establish its role as a global benchmark: “we needed a place that corresponded to the values and codes of a particular community, such as denim”. In this sense, she added “Barcelona is a dynamic, young and cosmopolitan city; a capital with inspirational, creative and audacious values in terms of art, fashion and lifestyle“.
For the Fira de Barcelona’s Director of Expansion, Pere Camprubí, this achievement “is part of the institution’s strategy to host leading benchmark event”. In this case, he adds, “Fira has opted for an innovative and dynamic show, at the service of a sector as deep-rooted in our country as the textile sector is; an event with important growth prospects that, with our position and experience, we can increase”.
About Denim by Première Vision
The event created in 2007 in Paris consists of two editions a year, one in May and the other in November, brings together clothing manufacturers, suppliers of accessories, etc. from over 20 countries and serves to reveal the trends of the next seasons and introduce new concepts for future collections. The fabrics, cutting-edge technologies, quality and finishes, the latest in colours and market prospects form part of   the diversity of issues tackled by the show.
The 2012 show brought together 95 exhibitors, 95% of which were international, and over 3,000 visitors, 72% of them foreign. The coming edition will be held until tomorrow in the French capital and will showcase the denim trends that will be worn in the spring-summer 2015 season and will draw inspiration from the tattoo culture. According to the organisers, this sector currently generates 51 billion Euros in sales worldwide and expects this figure to reach 56 billion Euros in 2018.
Barcelona, 27th November 2013
Communication Area
Fira de Barcelona
Av. Reina Maria Cristina, s/n
08004 Barcelona
Tel. 93 233 20 00
prensa@firabarcelona.com
Previous
Next