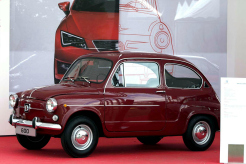 300 exhibitors will be at Auto Retro for its 30th anniversary

Auto Retro Barcelona will bring together around 300 exhibitors from twelve countries at its 30th anniversary show and will showcase versions from all eras of the Volkswagen ‘Beetle’. The show will be held on December 6th and 7th in Fira de Barcelona’s Montjuïc exhibition centre.
The list of this year’s new features includes an elegance contest that will award prizes for the best pieces, an exhibition of classic lorries and buses and another exhibition of Harley-Davidson motorcycles. This year’s Auto Retro is joining the celebrations of the 30 years of the Club d’Amics de Volkswagen de Catalunya that, in 1983, featured over 100 vehicles in Barcelona, in what was this brand’s first event in Spain.
After five editions, the Antic Car Club de Catalunya has decided to give the Antic Car Award to Joan Villadelprat in recognition of his professional career, since he is the Spanish team member who has worked the most in Formula 1 for 30 years, as chief mechanic in motor racing teams, such as McLaren, Tyrrell and Ferrari.
Barcelona, 28th November 2013
Communication Area
Fira de Barcelona
Av. Reina Maria Cristina, s/n
08004 Barcelona
Tel. 93 233 20 00
prensa@firabarcelona.com
Previous
Next