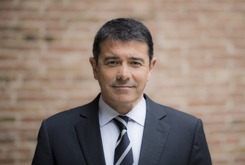 Agustín Cordón, the general manager of Fira, is leaving the institution to take on a new professional challenge

The current general manager of Fira de Barcelona, Agustín Cordón, is leaving the institution in November to take on a new professional challenge as Chief Executive of Grupo Zeta, following a long and successful tenure during which he has made a significant contribution to the expansion and projection of Fira in the international trade fair scene as well as positioning the institution as an important economic and civic asset.
Since he joined Fira in September 2004, Cordón has efficiently and authoritatively steered the institution’s growth, particularly during the years affected by the economic crisis, with a strategy focused on promoting the trade shows themselves, attracting major international events and boosting the institution’s presence abroad, all within a framework of accredited financial solvency and reputational integrity and the forging of close bonds with the public administration and sector associations.
In this respect, Cordón highlights “the outstanding support for my management” shown by the three institutions that sit on the Fira’s General Council – the Barcelona City Council, the Catalan Government and the Barcelona Chamber of Commerce – as well as the Board of Directors headed by its president Josep Lluís Bonet, and its Executive Committee and the institution’s workforce. “It has been a matter of great personal and professional pride and satisfaction to have spent all these years at such a great institution as Fira, as it has not only allowed me to do a job that I love but also to surround myself with a team of outstanding professionals and work with very different spheres of the economy and society.”
Meanwhile, the president of the Board of Directors, Josep Lluís Bonet, highlighted the fact that during all these years “Agustín Cordón has always had a clear strategic vision of the importance of Fira and the role it should play in an increasingly globalized and competitive world. I have had the privilege of being able to rely on his collaboration in driving an institution that today is a benchmark in Europe, a global operator and also a national project.” Bonet also highlighted Cordón’s work as vice-president of Mobile World Capital Barcelona (MWCB) and especially “his invaluable contribution to getting the Mobile World Congress to renew its commitment to Barcelona through to 2023.”
An outstanding professional track-record
Agustín Cordón, aged 52, graduated in Economic and Business Sciences from the University of Barcelona (UB) and has a postgraduate degree from the IESE Business School, as well as graduating from the Global Management Program for Executive CEOs at the Wharton School (Philadelphia), the China Europe International Business School in Shanghai (CEIBS), the ISE Business School in Sao Paulo and the IESE in Barcelona.
He started his professional career at Ernst & Young, combining auditing tasks with consultancy work, and several years later joined the American multinational Anheuser Bush where he held various positions in both Spain and the United States. After holding management positions at Earthgrains, Sara Lee and Bimbo, in 2004 he was appointed as General Manager of Fira de Barcelona, which he combined with that of Vice-president of the MWCB from 2012. He is also a member of the Executive Committee of the Spanish Chamber of Commerce.
In 2014, Fira de Barcelona posted the best results in his history, with revenue of 152.6 million euros, 30% higher than in 2013 and 32% higher than in 2012, the most comparable year in terms of the trade show calendar. Its EBIDTA was 19.8 million euros, very much higher than the 11 million euros recorded in the two previous years.
In the next few weeks, the Fira’s Board of Directors will be appointing the person to take over from Agustín Cordón at the helm of this trade fair institution.
Barcelona, 6 October 2015
Communication Area
Fira de Barcelona
Av. Reina Maria Cristina, s/n
08004 Barcelona
Tel. 93 233 20 00
prensa@firabarcelona.com
Previous
Next