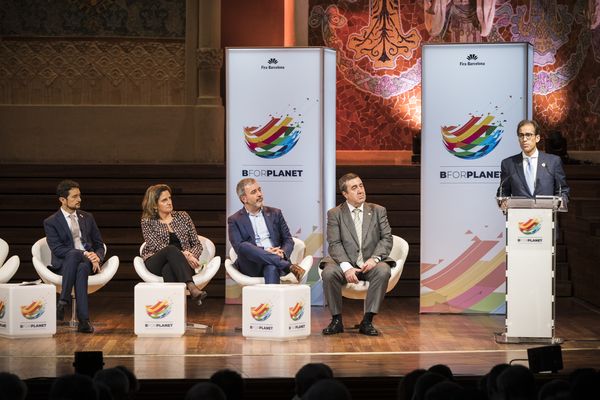 The event is supported by the Spanish Government, the Catalan Government and Barcelona City Council

Fira de Barcelona reinforces its commitment to sustainability and launches BforPlanet, focused on promoting the United Nations’ SDGs (Sustainable Development Goals) within the private sector. The event, supported by the Spanish Government, the Catalan Government, and the Barcelona City Council, forms part of the institution’s strategy to promote sustainable economic activity, responsible use of resources, environmental protection, and commitment to the SDGs.

This new event, set to take place from 26th to 28th May in Hall 1 of Fira de Barcelona’s Gran Via venue, will be held in tandem with Innovate4Climate, an exhibition specialising in financing, investment and climate markets organised by the World Bank.

The presentation, which took place today at the Palau de la Música Catalana, was attended by institutional representatives, including Teresa Ribera, fourth Deputy Prime Minister of the Government and Minister for the Ecological Transition and Demographic Challenge, Damià Calvet, Minister of Territory and Sustainability of the Catalan Government, and Jaume Collboni, first Deputy Mayor of Barcelona, as well as directors of companies and organisations such as Agbar, Basf, Bayer, Caixabank, Cellnex, Damm, FCBarcelona, MNG, Nissan, Orange, Renfe, Repsol, Sorigué, Telefonica, Toyota, Unilever, Vodafone, and Vueling, among many others.

BforPlanet will consist of three areas, which, under the names Be Inspirational, Be Proactive, and Be Synergy, will host talks to promote implementation of the SDGs, showcase specific projects, and tools to achieve the above and provide spaces for business and cooperation between entities.

Pau Relat, Chairman of Fira de Barcelona’s Board of Directors and director of the exhibition, stated that this new event forms part of the trade fair institution’s strategy to make a firm commitment to sustainability, and declared that “Fira, fully understanding the importance of environment, is aware of the impact trade fairs have, but also that they can be great sounding boards for firm action to promote sustainability and work towards a better planet that we can pass on to future generations.”

Talks and exhibition area
The Be Inspirational talks will be divided into two blocks. The first, known as Leadership Summit, will bring together internationally renowned speakers from various fields such as business, politics, and scientific research, while the second, called Challenge Sessions, will group together the other talks into thematic areas.

Be Proactive, the fair’s exhibition area, will contain nearly one hundred stands at which different companies and institutions will showcase their projects in the field of SDGs and their contributions to these goals. The exhibition area will also house the Innovation Plaza, a space where the latest products and projects that can contribute to the rapid implementation of actions to incorporate SDGs into any organisation will be on display.