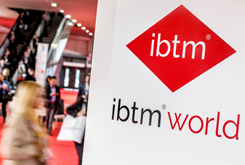 With over 3,000 exhibitors from 150 countries, IBTM World is a key event for both the city and the sector

The business tourism, congress and incentives industry is set to gather at Fira de Barcelona’s Gran Via venue between November 29 and December 1 for this year’s IBTM World trade show. It is the world’s leading trade fair in this speciality, bringing together over 3,000 exhibitor companies from 150 different countries and holding more than 87,000 business meetings with an expected footfall of over 17,500 professionals. The event has a major impact on the sector in Spain as a whole and also on Barcelona, one of the world’s leading cities for trade show organisation.
IBTM World 2016 will showcase all the latest innovations in specialist destinations, products and services for organising professional gatherings, highlighting the offerings of travel agencies, tour operators, congress and convention centres, hotel chains, cities and countries, service providers and international event organisers.
As in previous years, the event will include an Innovation Zone displaying the top technology and services solutions that will set the tone for the meetings sector in the future, selected by the world’s experts, together with the acclaimed international programme for hosted buyers, who will flock in from over 70 different countries.
The Training Programme will also be an important aspect of this year’s event, with over 100 conferences, workshops and seminars analysing the sector’s latest trends and also addressing global issues such as the impact of the Brexit, technology innovation, security, sustainability, customer engagement and staff organisation and recruitment. This year, IBTM World will concentrate on the business tourism sector in Spain – Spanish exhibitors make up 20% of those attending the fair – and once again there will be an exclusive training programme held in Spanish.
Barcelona, a congress city
Held at Fira de Barcelona since 2004, IBTM World has had a positive impact on business tourism in Spain, which saw a 15.5% increase in 2015 with 5 million business visitors coming to this country. It has also positively affected the city of Barcelona, with a financial impact of over €50m according to the show’s organisers Reed Travel Exhibitions.
In its annual ranking, the International Congress and Convention Association (ICCA) has rated Barcelona as the city with the second highest footfall at meetings organised in 2014 (with 127,468 participants) and third for the total number of congresses held (182 in 2015).
On a world level, Spain is the country with the second highest turnout to all events held in 2014, with 289,039 visitors, only outdone by the U.S., and fourth for the number of meetings organised (572 in 2015), behind the U.S., Germany and the UK and ahead of France and Italy.
Barcelona has confirmed that it will host a total of 223 new congresses in the period from 2015 to 2021, meaning it is likely to receive over 753,000 visitors.
Fira de Barcelona and its Montjuïc and Gran Via venues have played a vital role in Barcelona’s excellent ranking in the competitive field of city business event organisation.
Barcelona, November 2016
Communication Area
Fira de Barcelona
Av. Reina Maria Cristina, s/n
08004 Barcelona
Tel. 93 233 20 00
prensa@firabarcelona.com
Previous
Next