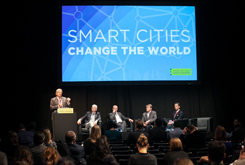 Involving more than 400 cities and 41 delegations from five continents

Between 18 and 20 November, the Smart City World Congress will be the key scenario for discussing the cities of the future. The leading international event on smart cities, held at Barcelona’s Gran Via exhibition centre, is hosting its biggest-ever international contingent this year: 400 cities, 40 mayors and 41 delegations.

Over the course of these three days, experts from all over the world will be addressing the challenges that will enable us to design more sustainable cities and guarantee a better quality of life for their inhabitants, covering a range of topics such as mobility, technology, energy efficiency, the environment, demographic management, urban planning, the economy and knowledge.

In addition to the trade show area featuring 240 companies, the congress programme of Smart City Expo brings together 400 speakers, some of the most notable of whom include Parag Khanna, regarded as the world’s leading geopolitical analyst and a former advisor to US president Barack Obama; futurologist and sustainability expert Alex Steffen; and architects Kengo Kuma and Deyan Sudjic, who will be discussing the creative process in the context of urban environments.

Smart city business offers opportunities to a number of sectors. According to a survey by Navigant Research, between 2014 and 2023 the smart urban technologies market will reach 174,000 million dollars with an annual growth rate of over 13.5%. Indeed, multinationals such as IBM, Cisco, Indra and Microsoft, all of which will be attending the show, have created dedicated divisions in this field. In this respect, more than 30 start-ups will be taking part in Smart City Expo to present their proposals in search of financing opportunities.

The event will coincide with the City Innovation Summit, a conference on innovation in the urban field organised by Barcelona City Council.