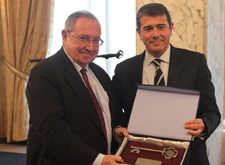 The Chair of Fira de Barcelona, Agustín Cordón, has been awarded the Key of the City of Barcelona for his business career and contribution to the city’s international promotion. Mr Cordón received the award, given every year by the Club d’Amics de la Clau de Barcelona, today in a ceremony led by Fira de Barcelona and Freixenet chairman Josep Lluís Bonet and attended by Club chairman Joan Gaspart.

During the ceremony, Bonet highlighted Cordón’s ‘high level of professionalism, initiative, strategic vision and ability to meet challenges with creative solutions, and his human qualities’. He also emphasised his work in positioning Fira at the forefront of the trade fair industry. Mr Cordón expressed his gratitude for the award, although he stressed that ‘Fira’s success is thanks to the institution’s entire team’ with whom he wished to share this recognition.

Agustin Cordón became chair of Fira de Barcelona, one of the most important trade fair institutions in Europe, in 2004. In 2012 he became vice president of Mobile World Capital Barcelona, where he is director of strategy and projects to make the city the world epicentre of the mobile and digital technologies industry through transformative initiatives in areas such as entrepreneurship, education, health, smart living and trade.

Mr Cordón received this award, which has a 40-year history, for his leadership of Fira de Barcelona over the last decade. Winners of previous editions include chair of Gas Natural Fenosa, Salvador Gabarró; chair of the multinational Grifols, Víctor Grífols; chef Ferran Adrià; chair of the Francisco Godia Foundation, Liliana Godia; chair of Codorniu, Maria del Mar Raventós; and chair of Freixenet, Josep Lluís Bonet, amongst others.