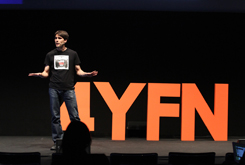 4YFN will be attended by the executives of Twitter, Airbnb and Accel Partners

Fira de Barcelona will once again host 4 Years From Now (4YFN), Europe’s most important meeting for mobile industry entrepreneurs, organised by Mobile World Capital Barcelona (MWCB) and GSMA Mobile World Congress. This year, double the participation of the first edition in 2014 is expected, gathering together around 5,000 startups and investors.

4YFN is a business platform for discovering enterprising initiatives in the mobile telephony sector, which brings startups and technology companies into contact with potential investors.

This second edition, which will be held from 2 to 5 March in the Montjuïc venue, will be attended by leading companies like Twitter, VICE Media, Airbnb or Accel Partners, the investment fund that invested in the start-up phases of Facebook, Dropbox, LinkedIn or Kayak. The event will bring together 120 conference speakers and 175 emerging companies from 14 countries, who will present their projects in the exhibition area.

4YFN is part of Mobile World Capital Barcelona’s Entrepreneurship and Innovation Programme, an initiative promoted by the Spanish Government, the Government of Catalonia, Barcelona City Council, Fira de Barcelona and GSMA, which aims to convert the Catalan capital into a benchmark of mobile technologies, taking advantage of the presence of Mobile World Congress.