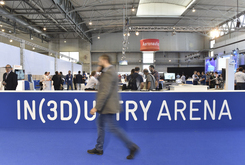 Robotics, moulds and dies, plastics and new materials will be on display together with 3D printing at the third IN(3D)USTRY fair, titled From Needs to Solutions. The purpose of the event is to promote the use of this technology throughout the industry and, for this reason, this year’s event incorporates new sectors as potential future users of additive manufacturing. Organized by Fira de Barcelona, IN(3D)USTRY will be held from 16 to 18 October in Hall 8 at the Montjuïc venue.
The third IN(3D)USTRY fair, titled From Needs to Solutions, extends its influence over the industrial ecosystem by increasing the number of sectors attending. In this regard, the event will feature five thematic areas (advanced manufacturing, moulds and dies, new materials, plastics and 3D printing), based upon which the content of the event will be developed.
Thus, within a single space, the event will include several previously absent industries which could potentially employ 3D printing. The advanced manufacturing area will incorporate the field of robotics applied to the industrial sector. The moulds and dies area will explore how 3D printing can contribute to reducing costs in this sub-sector. And the new materials area will address the huge possibilities opening up with the use of innovative plastic and metallic components.
The event will be structured around the IN(3D)USTRY Arena, a large area for innovation containing a stage where several representatives of companies which are already applying 3D printing to their production processes will explain their experiences to the visitors. These will be companies in sectors such as aeronautics, health, industry, cars and retail.
There will also be an exhibition area displaying numerous examples of parts manufactured by means of this innovative technology, as well as the presence of manufacturers showcasing their latest innovations in the field of cutting-edge printers.
Miquel Serrano, the event’s director, declares that “the incorporation of new sectors into this year’s fair will enable us to expand the spectrum of additive manufacturing and view the enormous possibilities offered by this technology in many industrial sectors. By grouping together all the production techniques which complement additive manufacturing we will display the entire production and value chain.” According to Serrano, “three years after its launch, IN(3D)USTRY is now the leading fair in Spain and this year, its third, it will also enable us to establish ourselves as the primary benchmark in Southern Europe.”
Barcelona Industry Week
IN(3D)USTRY, From Needs to Solutions, forms part of Barcelona Industry Week, which also encompasses the IoT Solutions World Congress, the world’s leading event in the Internet of Things industry, and Healthio, specializing in health and sanitary care technologies. The three events, which share synergies and provide a platform for trade and knowledge in several industrial sectors, will be held from 16 to 18 October at Fira de Barcelona.
Barcelona, 22 February 2018
Communication Area
Fira de Barcelona
Av. Reina Maria Cristina, s/n
08004 Barcelona
Tel. 93 233 20 00
prensa@firabarcelona.com
Previous
Next