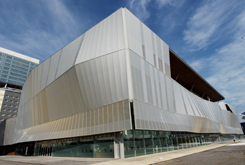 Fira de Barcelona will take over the management of the Barcelona International Convention Centre (CCIB) for a period of 50 years from 2021, when the contract with the current operator expires. An agreement has been reached with the City of Barcelona, owner of the facilities and the exhibition centre, to thus reinforce its position in the Spanish and European framework.
With this agreement, Fira de Barcelona will increase the space available for congresses and events and will be able to design a specialist strategy for its premises. Integral management will contribute to the expansion of the institution, make it more competitive and give a new impetus to the Barcelona’s status as an important trade fair and congress platform.
With regard to this, during the announcement of the initiative today, Ada Colau the Mayoress of Barcelona, pointed out that “this will help to reinforce Barcelona’s importance and international nature, and have a favourable effect on the economic and social fabric of the city in the future. She also stressed that “Fira has a great public importance that enriches the project” and positively valued “the influence it will have on the Besòs area, which is immersed in a process urban regeneration and social improvement”.
For his part, Constantí Serrallonga the general director of Fira de Barcelona, highlighted that “the agreement will contribute to Fira’s position at a global level, will strengthen its competitiveness, its international nature and its role as a magnate for events in the important European trade fair sector, besides creating new opportunities for the whole of the city and the region”.
A versatile, functional building
The Barcelona International Convention Centre, designed by the architect Josep Lluís Mateo, covers an area of 75,000 m2 laid out over 38 multi-purpose rooms. It can accommodate up to 15,000 visitors, including the auditorium, and has a columnless exhibition area of 11,340 m2. It is a versatile, functional building designed for a wide range of events, which takes advantage of natural light and openness to the sea, and was built with a particular concern for energy saving.
For its part, the Forum auditorium which was designed by the architects Herzog and De Meuron and is connected to the convention centre through an underground boulevard, covers 25,000 m2 and has a capacity for 3,100. The two buildings are equipped with state-of-the-art technological facilities.
Since it came into being in 2004, the CCIB has hosted more than 600 events of all kinds, such as congresses, conventions, cultural events and concerts, with nearly five million attendees.
Currently, the CCIB is managed by the GL Events CCIB SL company, of which the French multinational GL Events holds 80% of the capital, the City of Barcelona 12% and the Hotel Association the remaining 8%.
Common trade fair strategy
With the management of the CCIB by Fira will widen the opportunity to hold new fairs and congresses which meet the social and business demands and the range of events, complementing the availability of the Gran Via and Montjuïc venues.
The Gran Via venue, with a 240,000 m2 exhibition area, will be devoted to large fairs, congresses, conventions and professional events, whilst Montjuïc, with 134,000 m2, will continue to host medium-sized fairs, public events and small congresses. The CCIB, for its part, will host congresses, conventions and events of medium size and audience.
Thanks to this initiative, the various exhibition facilities in Barcelona will have a common strategy and comprehensive management that will make it possible to take better advantage of the economic and social opportunities derived from the growing importance of fairs, congresses and what is known generically as congress tourism.
The urban environment
The CCIB is part of a complex of facilities built on the occasion of the Universal Forum of Cultures 2004, in the urban area between Barcelona and Sant Adrià de Besòs. It is located by the sea, in the heart of the Diagonal Mar district and at the end of the 22@ district, which specialises in companies in the sectors of new technologies, culture, information, sustainability and knowledge. Around 4,900 hotel places are available in the area.
950,000 people live in the Besòs district, which is geographically linked the city centre. This represents 30% of the population of the Metropolitan Area of Barcelona and it is now engaged in an important process of social and economic transformation.
In regard to this, the CCIB will contribute to local development through partnership and support strategies for the economic and social fabric of the surrounding neighbourhoods.
Barcelona, 20 February 2018
Communication Area
Fira de Barcelona
Av. Reina Maria Cristina, s/n
08004 Barcelona
Tel. 93 233 20 00
prensa@firabarcelona.com
Previous
Next