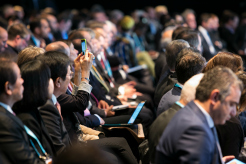 Featuring some 80 speakers, the sessions will address the resilience, governance and financing of water

From 15 to 17 November, Iwater – Fira de Barcelona’s new trade show on the integral water cycle – will include the Iwater Forum among its core activities, a series of conferences and debates in which some 80 national and international experts will be taking part. The aim of the forum is to discuss the factors that are currently being defined and will influence the future management of water in areas with high water stress, such as Mediterranean countries. The sessions will revolve around three key interconnected topics: the resilience, governance and financing of this basic resource and its infrastructures. These three themes will help to pinpoint and uphold the true value of water and its impact on social and economic development.
In the words of Ángel Simón, the president of Iwater and Deputy Chief Executive Officer in charge of Water Europe, “this Forum will be an essential meeting place for all the stakeholders involved in the sector and will provide a source of opportunities for boosting and promoting growth.’ He also contended that ‘it will be the ideal venue for championing the concept of the ‘true value of water’ as a key factor in the way society operates and as an economic player that is essential for sustainable growth.’
Speakers at the Iwater Forum include public administration representatives, academics and water management professionals from a variety of countries. Some of the names already confirmed include US scientist Peter Gleick, an expert in environmental sciences, with a particular emphasis on the global challenge of providing fresh water, researcher and co-founder of the Pacific Institute in Oakland, California. Other experts of international renown taking part in the forum are the former head of the Superintendence of Health Services of the Chilean Government, Magaly Espinosa; the associate director for Europe and the Middle East of the Rockefeller Foundation project ‘100 Resilient Cities’, Konstantina Karydi; the principal administrator at the OECD Environmental Directorate, Xavier Leflaive, and the head of the Global Water Operators Partnerships Alliance (GWOPA) of the UN Habitat Programme, Faraj El-Awar.
When it comes to explaining the core themes of the Iwater Forum, the scientific coordinator of the programme and president of the European Water Technology Programme, Tomas Michel, contends that ‘resilience in water infrastructures and at every management level are essential to guaranteeing its future availability and access to the entire population.’ To do so, he continues, ‘we are going to need more inclusive governance systems that take into account the integral water cycle as a whole, but which are founded on a new approach to financing.’ The Iwater Forum plans to unite these three core themes to move forward towards the future of water management.
Resilience, governance and financing
Various studies indicate that the increase in the global population will engender a water deficit of 40% by 2030. This forecast, added to the effects of climate change, forces us to seek formulas that modify current consumption patterns and encourage the reuse of water to combat this scarcity. In this respect, various speakers at Iwater will be focusing on the capacity to overcome this water deficit in cities, in agriculture and in industry, the three biggest users of this resource. The views of entities such as the Orange County Water District (OCWD) of California; the Rockefeller Foundation, the UN Habitat Programme and the Pacific Institute will be up for discussion.
According to the Organization for Economic Cooperation and Development (OECD), 40% of the world’s population live in areas of hydric stress. To guarantee a supply of water of sufficient quantity and quality, it will be essential to coordinate the different agents involved. To do so, the Iwater Forum will compare systems with a definitive emphasis on private sector management, such as Chile, against those with mainly public management systems, such as Denmark, and will analyse the current model in Spain which combines the two. It will also address the matter of regulation, with examples such as the United Kingdom, Portugal and Italy, which have opted for a single central regulatory body in contrast to the marked local model used in Spain.
Finally, discussions at Iwater will also address the planning of new financing formulas to fund both the renovation of obsolete infrastructures and the construction of new ones. This will explore the possibilities of public-private investment and the range of financing proposals used for infrastructures in other parts of the world with a hydric situation similar to that of Spain, through the views of institutions such as the OECD, the European Investment Bank (EIB) and the Development Bank of Latin America (CAF).
The Forum will alternate presentations by international experts with round tables featuring representatives of Spanish public administrations, organisations and companies who will give a more local perspective of the challenges facing the water sector in Spain.
Different spaces for generating synergies
As well as the discussion forum, the new Iwater event will include two areas where people can view different projects and applications of practical solutions: the InnoHub, focused on innovation, and the TechHub, with an emphasis on technology.
Finally, Iwater -which will be held in Fira Barcelona’s Gran Via venue- will have a large trade fair area featuring companies that specialise in water treatment, sanitation and distribution, control and measurement systems, automation and IT services, consultancy, engineering and infrastructures, irrigation, agriculture and industry, and science, research and development. Some one hundred firms have already confirmed their participation, including (in alphabetical order): Aqualia, AVK Válvulas, Azud, Contazara, Culligan, Ebara, Hanna Instruments, Hydroten, Kamstrup, Insol, Kurita, Lacroix Sofrel, Puragua, Remosa, Sorigué and SUEZ.
Barcelona, 30th June of 2016
Communication Area
Fira de Barcelona
Av. Reina Maria Cristina, s/n
08004 Barcelona
Tel. 93 233 20 00
prensa@firabarcelona.com
Previous
Next