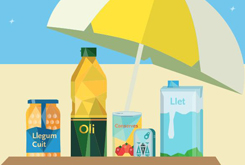 Fira de Barcelona has once again joined the campaign ‘Hunger Doesn’t Go on Holiday’, launched by the Banc dels Aliments to help those most in need during the summer. In line with its corporate social responsibility policy, the institution has given over Hall 1 of the Montjuïc site to the collection of donations from 6 to 8 July.
Basic foodstuffs are needed, such as rice, pasta, pulses, oil, milk and canned foods, which will be distributed to over 235,000 beneficiaries this summer.
Those who would like to collaborate can bring their donations directly to the Montjuïc centre’s Hall 1, where last year 400 kilos of foodstuffs were collected, or go through the different activities organised by collaborating entities, companies and institutions.
Over 20% of the population of Catalonia lives below the poverty line, a risk situation that is exacerbated in the summer when school canteens are closed and the number of food donations drops. The aim of the ‘Hunger Doesn’t Go on Holiday’ campaign is to fill the stores of charitable organisations in towns throughout Catalonia to ensure that the foodstuffs reach those in most need during the summer.
Barcelona, June 2016
Communication Area
Fira de Barcelona
Av. Reina Maria Cristina, s/n
08004 Barcelona
Tel. 93 233 20 00
prensa@firabarcelona.com
Previous
Next