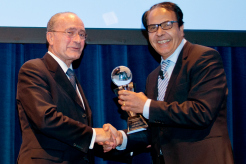 Malaga, Indianapolis and the Goto islands win awards for being the most sustainable cities

Today sees the end of the 27th International Electric Vehicle Symposium (EVS27) that opened on Monday in Fira de Barcelona’s Gran Via Exhibition Centre. This has been the most successful edition ever with 4,000 visitors from 58 different countries, 1,300 congress attendees and 232 international exhibitors that met up in Barcelona to promote the electric transport industry and tackle its future challenges. This afternoon, the World Electric Vehicle Association (WEVA) has recognised the three most sustainable cities with the E-Visionary Awards.
The Mayor of Malaga, Francisco de la Torre Prados, the Mayor of Indianapolis (USA), Gregory Ballard, and the deputy Mayor of the Goto Islands (Japan), Motoki Nakano, collected this award for their sustainable mobility projects. These awards recognise the regions and territories for their initiatives to promote electric vehicles as a sustainable mode of transportation. At every edition, the WEVA selects one European, one American and one Asian city as recipient of the award.
EVS27 has been a showcase for the leading manufacturers to exhibit their electric vehicle models, such as the Nissan Leaf, the BMW i3, the Volkswagen e-UP! and the Renault ZOE. Moreover, the sector’s new technologies and innovations, such as the faster charging stations and Qualcomm’s inductive charging technology, which will come in to use next year in the Formula E championship, will set the trends for the sector’s future.
The Director of EVS27, Adriana del Solar, explained “the event marks a turning point in the sector that demonstrates great future potential and that, at this edition, has aroused great international interest”.
With regard to use of the electric vehicle, the President of the WEVA, Angel Aghili, said “there is no going back because the technology is already here. The market is also ready and citizens have a wide range of automobiles to choose from…if the combustion engine was the catalyser of the petroleum industry in the 20th century, in the 21st century, the electric engine is the driver of renewable energy and is also the solution for Europe’s energy independency“.
South Korea, the next edition
The EVS is regarded as the global electric transportation industry’s premier forum. Barcelona has hosted it for the first time after winning an international tender. The next edition, EVS28, will be held in the South Korean city of Goyang from May 3rd to 6th 2015.
Barcelona, 20th November 2013
Communication Area
Fira de Barcelona
Av. Reina Maria Cristina, s/n
08004 Barcelona
Tel. 93 233 20 00
prensa@firabarcelona.com
Previous
Next