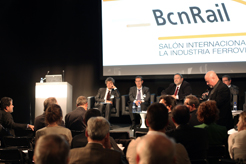 The fourth BcnRail, Fira de Barcelona’s International Railway Industry Show, has establiushed the guidelines for the sector’s future. Openinbg up to new markets, like Brazil; increasing the degree of competitiveness of freight, for which the Mediterranean Corridor is revealed as a fundamental element; and achieving more involvement of private companies in management are the main conclusions reached by experts at the railway sector’s only fair held in Spain.

“There are real business opportunities for the Spanish railway industry in Brazil because we need technology and innovation in order to develop our railway network”, said the President of the National Association of Rail Freight Companies (ANTF), Rodrigo Vilaça; and the fact is that the Brazilian federal government plans to invest 36 billion Euros to modernise its network and build over 10,000 kilometres of tracks in the next 30 years.

Another way to guarantee the successful future of the sector is to increase freight traffic that, at present, only accounts for 3% of the total. “It is a ridiculous figure since, given the structure, we have an enormous capacity for growth”, said the President of the ADIF, Gonzalo Ferre. In his congress on railway liberalisation organised by the Colegio de Caminos, Canales y Puertos de Cataluña, Ferre added “in 2013, freight traffic will amount to 21,071 million gross tons per kilometre compared to 27,825 million in 2008”.

The approval, on November 19th, by the European Parliament, to finance up to 40% of the cost of works on the Mediterranean Corridor, must have an influence on the increase in competitiveness of railway freight. In the 2nd International Railway Forum, the coordinator of the European Commission’s Trans-European Transport Network, Carlo de Grandis, said “what concerns Europe is interoperability”, that is, the total connection between all lines that make up the network.

For his part, the Secretary of Infrastructures and Mobility of the Catalan Generalitat, Ricard Font, appealed to the sector’s companies to “increase their involvement in the management of infrastructures built in recent years”. For Font, “interoperability and intermodality are key”. He also advocated an increase in public-private collaboration in order to “tackle business plans”, which make infrastructures like the Mediterranean Corridor profitable.

Over 5,000 trade visitors, 800 congress attendees and 200 speakers took part in BcnRail. The President of BcnRail, Javier Vizcaíno, said “in 2013, we have been invested in supporting the ancillary and components industry’s SMEs in our sector, strategic for the Spanish economy”.