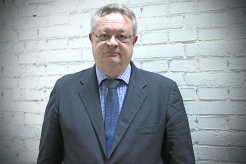 The Director of Agfa Graphics in Spain, Portugal and Italy, Ángel Artola, new President of Graphispag

The President of the Agrupación de Suministradores de Artes Gráficas (ASAG), Graphispack Association and Director for Iberia and Italy of Agfa Graphics, Ángel Artola, has been appointed President of the Organising Committee of  Graphispag, Fira de Barcelona’s International Graphics Industry and Communications Show , which will be held from May 24th to 27th 2015.  Artola replaces Miquel Heredia, who held the post during the last two editions and is currently the show’s President Emeritus.

Born in Barcelona in 1963, Ángel Artola graduated with a degree in History from the Universidad Autónoma de Barcelona (UAB) and, since 2011, has been the Director of Agfa Graphics in Spain, Portugal and Italy, a company he joined in 1998 and where he has spent the majority of his professional life. Because of his long career and his links to graphics associations, Artola has broad knowledge and experience in the sector and has witnessed the rapid transformation of the graphic communication industry in recent years.

The President of Graphispag has taken up his new responsibility with a double challenge. “This next edition of the show has to establish the model of business for which the graphic communication industry is looking and, at the same time, open up the market to other demand sectors that are using graphic applications”, said Artola.

Organised in collaboration with the Graphispack Association, Graphispag 2015 will cover everything from product conception to printing on any substrate and will show the new areas in which printing has the most growth potential. The show will also serve as a trends observatory for the graphic and visual communications sector with multiple conference spaces, an innovation and entrepreneurship area and an exhibition of new graphic applications.