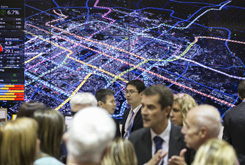 Under the theme Empower Cities, Empower People, Smart City Expo World Congress (SCEWC), the leading international event on smart cities will host on 2017 its biggest edition to date. From November 14 to 16, Fira de Barcelona’s Gran Via venue will gather 700 cities worldwide as well as 675 exhibitors and 420 speakers, all of them record-breaking figures. The event will focus on strategies to empower metropolises and their citizens through active participation, critical reflection, awareness and access and control over important decisions and resources. The event will include the first Smart Mobility World Congress, a summit resulting from the merge of BcnRail, international railway industry show, and the SCEWC’s own mobility track.
During these recent years, the concept of smart cities has been widespread across the globe raising awareness about the need to transform cities and through them the world. Many have agreed that digital technologies and more precisely ICT and IoT are the backbone of the cities of the future and that without them urban transformation would be impossible. But SCEWC will focus on the underlying truth within metropolises: they are run and inhabited by people and these citizens are more so the future of cities.
The event’s director, Ugo Valenti, said that “We believe that the role that citizens will play in the near futures will be crucial. Top-down governance approaches are gone for good and we need to shift the relation between city governments and residents taking it one step further. Never before in history has there been so much talent and creativity concentrated in so little space. It is our responsibility to seize this opportunity and use all the means to grasp the full potential of these urban powerhouses and that’s what Smart City Expo World Congress will be focusing on this edition.”
On 2017, SCEWC will host 675 exhibitors, a 14% increase compared to 2016, over 30,000m2 of exhibition floorspace where companies from every industry within the smart urban ecosystem such as Alstom, AT&T, Bosch, Cellnex, Cisco, Deutsche Telekom, Engie, FCC, Ferrovial, Fiware, Hexagon, Huawei, Intel, Mastercard, Microsoft, PTC, SAP, Siemens, Silver Spring Networks, Suez and ZTE will showcase their latest solutions.
The event will also gather and representatives from over 700 metropolises from around the globe. Among the cities who will have representatives in Barcelona are Atlanta, Berlin, Busan, Casablanca, Dubai, Grenoble, London, Lyon, Montevideo, Moscow, New York City, Puebla, Québec, Taipei, Tel Aviv and Zheijhang. While the event will also host several country pavilions such as those of Australia, Austria, Belgium, Chile, China, Denmark, Dubai, Estonia, Finland, Germany, Holland, India, Israel, Italy, Japan, Norway, Sweden and USA.
A Hub of Urban Knowledge
A total of 420 international experts will share their insights about how the urban future should address its most pressing challenges. All of them will delve into the future of urban settlements through a conference program structured in 8 themes: Government, Safe cities, Economy, Sustainability, Circular, Society and Data Technology.
Among the speakers feature Robert Muggah, a political scientist specialized in the crossroads between cities, security and technology; Joan Clos, Executive Director of the United Nations Human Settlements Programme (UN-Habitat) and former Mayor of Barcelona; Bettina Warburg, blockchain researcher, entrepreneur and educator who works with Governments and members of the Fortune 500 list to drive the deployment of blockchain technology; Dimitri Zenghelis, one of the leading experts in climate change economics, Senior Visiting Fellow at the Grantham Research Institute at the London School of Economics; and Beth Simone Noveck, director of the Governance Lab and member of the first Technology Secretariat and head of the White House Open Government Initiative.
Smart Mobility World Congress
One of the key subjects every city has to address is Mobility. The ability to guarantee safe and easy movement both within a city and from one metropolis to another has indeed become one of the cornerstones of smart cities. By 2050 there will be almost 7 billion people living in cities and over the same period of time road and rail travel will double and freight through these same canals will increase three-fold. To tackle the challenges facing cities transport-wise, SCEWC will host the first Smart Mobility World Congress, a smart transport summit that will showcase the most innovative advances in urban and inter-city mobility from companies such as Alstom, Amurrio, CAF or Railtech Sufetra.
The Smart Mobility World Congress will have its own space within SCEWC, where specialist mobility companies will be grouped together, and it will also have its own auditorium for transport conferences, the Smart Mobility Hub. Among the 80 experts in transportation speaking at the conference is Hyperloop CEO, Dirk Ahlborn, who will analyze the impact that this new mode of transportation conceived by Elon Musk might have in consolidating a network of metropolises. The Hyperloop consists of a vacuum tube or network of tubes through which a capsule with passengers can travel at speeds of up to 1,200 km/h.
In addition, the Smart Mobility World Congress will host the annual congress and the 31st General Assembly of the Latin American Metro and Metropolitan Association (ALAMYS), which will bring together urban transport operators and authorities from Spain, Portugal and Latin America and will analyze the benefits of metro and streetcar systems in urban environments.
Barcelona, November 10 2017
Communication Area
Fira de Barcelona
Av. Reina Maria Cristina, s/n
08004 Barcelona
Tel. 93 233 20 00
prensa@firabarcelona.com
Previous
Next