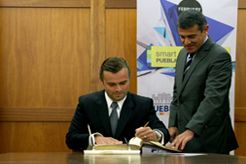 Smart City Expo World Congress (SCEWC), the global event on smart cities organised by Fira de Barcelona, has designated the Mexican city of Puebla as the venue for the Latin American edition in 2016. Smart City Expo Puebla will take place in the Centro Expositor Puebla in February 2016 and will focus on Social Equity.

With Smart City Expo Puebla, Mexico will join Japan, Canada and Colombia as a host country of the greatest international summit on smart cities, Smart City Expo World Congress, held every November in Barcelona (Spain) and whose last edition gathered 400 cities, 41 official delegations, 40 mayors and over 9,000 visitors over the course of three days.

The Mayor of Puebla,Tony Gali, said that “hosting this international event in our city should provide us with the tools to promote social equity in all Latinamerican cities”. And added that “we’re also confident that Puebla will now become smart city model for other Latinamerican cities.”

Fira de Barcelona’s CEO, Agustín Cordón, said that “‘holding the edition in Puebla isperfectly aligned with the international strategy of both the event and Fira de Barcelona. Mexico is the perfect location, acting as it does as a bridge between the North American and Latin American markets, which puts us in a privileged position from which to promote urban projects in Latin America’.

Founded in 1531, Puebla is a World Heritage Site and its old town is the largest in the Americas with more than 2,600 buildings catalogued by UNESCO. It was the most important city in the viceroyalty and the main trade hub between Europe and America for 300 years. It is currently the fourth largest city in Mexico—3 million people live and work in its metropolitan area—and has a modern exhibition centre built in 2011.

International expansion
Through the holding in Mexico of the Latin American edition of Smart City Expo, Fira de Barcelona consolidates its strategy for international expansion of the event. This coming December, Canada is to host the first North American edition, in Montreal, while today the authorities of the Japanese prefecture of Kyoto visiting Barcelona closed an agreement to host the second Asian edition of the Expo. Theses agreements are part of a internationalization strategy that anticipates organising further international editions which will be announced shortly.