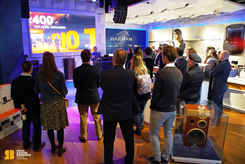 Best-selling author who takes a critical look into Amazon, Apple, Facebook and Google

Scott Galloway, one of the most recognised voices in digital marketing, speaker at RBEWC

The first edition of the Retail and Brand Experience World Congress (RBEWC), the event on the world of retail organised by Fira de Barcelona, to be held from 27th to 29th May in the Gran Via venue, will include among its conference speakers Scott Galloway, the marketing guru who triumphed as a best-selling author critical of today’s four tech giants. Galloway will share the bill with nearly a hundred speakers from companies such as British Airways, Alibaba, El Corte Inglés, Glovo, Pernord Ricard or Puig, who will be analysing the main challenges faced by retail at a time of paradigm shift caused by the digital upheaval that is transforming the sector.
Scott Galloway, who will be taking part in the congress via video conference, is a professor of brand strategy, digital marketing and luxury marketing at the Stern Business School of New York University, and creator of the Digital IQ Index that evaluates luxury brands according to digital criteria. This speaker has positioned himself as one of the leading international analysts as a result of the publication of the book “The Four”, where he casts a critical eye on what he defines as the “oligopoly” of the four American tech giants, Amazon, Apple, Facebook and Google, for the damage he claims they have done to competition in the world market.
The head of the RBEWC congresses, professor of marketing at the IESE business school, José Luis Nueno, considers “having Scott Galloway take part has put the congress on the world events map in the area of retail innovation”. According to Nueno “his testimony will help generate a debate around the power and influence that the big tech companies currently wield in our lives and the economy”.
Salvador Tasqué, the In-house Business Director of Fira de Barcelona, affirms that “our goal is to bring to the RBEWC the sector’s leading international companies and experts to reflect on the main challenges the retail world will have to face. Both Galloway and the rest of the speakers, from some of the main companies in this process of transformation, will contribute confluent and opposing viewpoints, which together will help foresee its immediate future”.
Food, fashion and mass consumption
In this sense, among the latest speakers who also have confirmed their participation in RBEWC, it is worth mentioning Bárbara Fernández Ochoa, Manager Off Trade at Pernord Ricard; Rodrigo Cipriani, Managing Director at Alibaba; Sacha Michaud, Co-Founder of Glovo; Javier Bach Kutschruetter, COO at Puig; Ricardo Balmorí, Director of Fashion, Beauty and Shoes Accessories at El Corte Inglés. Some names that add to those already confirmed, such as Alex Cruz, Chairman and CEO at British Airways; Pascal Clouzard, Executive Director at Carrefour France; Fuencisla Clemares; GM at Google Iberia; o Bernd H.Schmitt, Professor of Marketing at Columbia University.
Along with its function as a congress, the first edition of the Retail and Brand Experience World Congress will have 120 exhibitors, among them emerging companies in the start-up area and others with an eminently technological profile. The programme for the event will include an awards ceremony for the best innovations and a full schedule of workshops and talks.
Barcelona, 17th April 2019
Communication Area
Fira de Barcelona
Av. Reina Maria Cristina, s/n
08004 Barcelona
Tel. 93 233 20 00
prensa@firabarcelona.com
Previous
Next