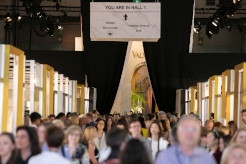 With 74% of brands from abroad

With 429 brands, 74% of them international, and the fashion shows of 35 major firms that have exhibited wedding dresses, suits for grooms, cocktail dresses and eveningwear on the catwalk, Valmont Barcelona Bridal Fashion Week 2019 this afternoon closes the doors on a particularly successful edition, both for exhibitors and buyers and for all those in the bridal industry who have visited the trade fair. The celebration of events such as the Bridal Night, featuring the fashion show of the American firm Marchesa, and the ceremony of the ELLE International Bridal Awards were the finishing touches to the VBBFW which confirms its place as the world’s leading event in the bridal fashion industry.
In this edition, VBBFW, organised by Fira de Barcelona, once again surpassed its own records: the fashion shows of 35 firms and the more than 28,000 dresses and accessories exhibited at the trade fair attracted attendees, just a few hours after the closing of the trade fair, numbering more than 22,000 visitors from 88 countries, almost 2,000 more than in 2018.
Ratifying its great international pulling power, the fair featured more than 429 firms, 15% more than last year, 74% of them international from 34 countries, 6 per cent more than 2018, which is the largest percentage in its history. More than 1,300 key buyers, contacted directly by the fair, attended the event, 86% of them international, mainly from Italy, Germany, China, USA, UK, France, Japan, and Brazil, all target countries of the fair in its process of internationalisation.
The 2020 trends triumph on the fashion show
The VBBFW fashion show has been the most complete stage for the creations of the next spring/summer season 2020 exhibited in the fashion shows of the major leading designer brands such as Jesús Peiró, Pronovias and Rosa Clará, Cristina Tamborero, Sophie et Voilà, Carlo Pignatelli, Isabel Sanchís; Marylise & Rembo Styling, Inmaculada García, Isabel Zapardiez, Ana Torres, Esther Noriega, Cymbeline; Marco & María, Yolancris, Ramón Sanjurjo, Carla Ruiz, Sonia Peña and Demetrios.
Other brands took part this year for the first time, such as Marchesa, the American firm that presented its Spring 2020 collection, inspired by Rainer Maria Rilke’s poem ‘Pathways’, at the Palacio de Pedralbes during the Barcelona Bridal Night, and The Atelier Couture, the Malaysian brand that presented the collection of its creative director, Jimmy Choo, as well as the American designers Maggie Sottero and Mori Lee, the Israeli brand Flora, the Spanish brands Aire Barcelona, Fely Campo, Beba’s Closet, Sedomir Rodriguez de la Sierra, Maria Salas, Jacques Beauhamais, and the Bulgarian designer Julia Kontogruni.
The VBBFW 2019 fashion show was also the setting for the “New Talent Show” parade with the creations of young designers such as the Spaniards Olga Maciá, Chiffon Atelier, Mireia Balaguer and Lorena Panea and the Italians Simone Marulli and Poesia Sposa,
According to Estermaria Laruccia, director of Valmont Barcelona Bridal Fashion Week, “Today, after its 29th edition – the 5th organised by Fira de Barcelona- which closes this afternoon, we can say that VBBFW is already the leading international bridal and party fashion event, the stage where trends are presented and the place where the industry of the national and global sector meets. In the future, we want to continue to inspire and share the enthusiasm for our project with firms, buyers, the industry and the fashion world in general.
For her part, Marta Raich, president of VBBFW, states that “This edition has marked a before and an after in VBBFW’s journey that, with determination and optimism, has managed to place itself in the front row of the world fairs and events dedicated to bridal fashion”.
Elle International Bridal Awards
The ELLE International Bridal Awards 2019, organised with the collaboration of VBBFW, were awarded last night in the Main Hall of the University of Barcelona. The wedding dress designer and star of the television programme “Say yes to the dress”, Randy Fenoli, was responsible for presenting the evening that brought together more than 500 guests.
The awards, which recognise talent and excellence in various areas of the bridal world, in this edition have recognised the Spanish firms Rosa Clará with the award for Best Career Achievement, and Yolancris with the award for Best Fashion Show. The Italian Peter Langner received the Best Bridal Dress award for his Janet Dress, while the Best Bridal Collection award was shared by Antonio Riva, for Petals Collection, and Elie Saab, for his Bridal Springs 2019. For his part, Tom Ford received the award for Best Bridal Collection with his Spring/Summer 2019 creations, and the English designer Stella McCartney won two awards: one for Best Promotion Campaign, and the second for Best New Bridal Talent. Finally, the company TIFFANY & CO. was recognised as the Best Jewellery Collection for its ‘The Tiffany True Ring’; Il Pellicano Hotel in Porto Ercole (Italy) as the Best Honeymoon Resort, and the Italian Anna Frascisco as the Best Wedding Planner.
The directors of 10 international editions of ELLE and the director of VBBFW, Estermaria Laruccia, formed the panel of judges that selected the winners from among the firms nominated by the editions of ELLE Australia, Germany, Hong Kong, Italy, Japan, Korea, Middle East, Spain, Sweden and Turkey.
The week dedicated to fashion for the bride, groom, party and accessories will return from 20 to 26 April 2020 to Fira de Barcelona to present the 2021 collections of the major bridal fashion brands.
Barcelona, 28 April 2019
Communication Area
Fira de Barcelona
Av. Reina Maria Cristina, s/n
08004 Barcelona
Tel. 93 233 20 00
prensa@firabarcelona.com
Previous
Next